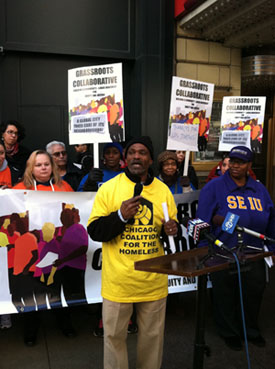 CHICAGO (WLS) – Now that Chicago is not hosting the G8 Economic Summit, a group of community activists is calling for the money that was to be spent on the meeting, to go towards helping the poor.

About two dozen people demonstrated this morning in front of the State Street headquarters of the economic development group World Business Chicago, which Mayor Rahm Emanuel has designated to raise $65 million to pay the costs of the summit.

“We feel that that money should go to help make our community safer, by creating some jobs that can take people off the streets”.

Jenkins and other activists tried unsuccessfully to secure a meeting with WBC officials. Despite the White House decision to move the G8 meetings to Camp David Maryland, Chicago will still host a meeting of NATO world leaders May 20th to 21st at McCormick Place.