Estimate of Homeless People in Chicago

In total, an estimated 76,998 people experienced homelessness in Chicago throughout 2018. This is the most recent estimate available, based on data released in 2020. Findings suggest that the total decreased by 4,282 people from 2017 to 2018, though there was a significant increase (of 1,973) in those who lived on the street or in a shelter. 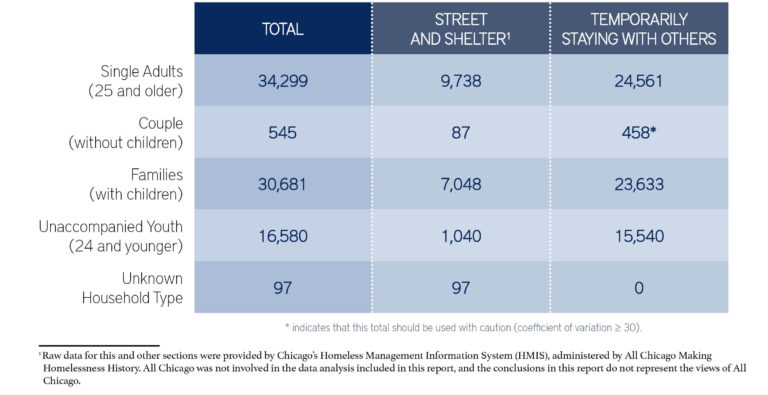 Download the full Estimate of Homeless People in Chicago (2020) report. This Chicago Coalition for the Homeless report includes detailed methodological information, estimates on sub-populations and changes year-to-year, and interviews with people with lived experience of homelessness. Finding summaries are also available in Spanish, Polish, and Simplified Chinese.

While there is no single definition of homelessness, CCH developed a model to more accurately estimate the scope of homelessness in a city. Chicago’s estimate is drawn from data compiled by the U.S. Census Bureau and the city of Chicago, and includes families, youth, and adults who are temporarily staying with others, often in overcrowded and unreliable living situations.

Many of those who doubled-up were students – children, teens, and some unaccompanied youth – who struggled to get an education without a family home. In the 2018-19 school year, at least 16,451 Chicago Public Schools (CPS) students experienced homelessness, 87.5% (14,403) of whom temporarily stayed with others. It is likely that their housing needs remain unmet, as people experiencing homelessness are generally ineligible for housing assistance if not living in shelters or on the street.

Only 11% of Chicago’s homeless students were served by the shelter system.

This enrollment data is collected by the U.S. Department of Education, which recognizes all forms of homelessness that children and youth might experience. Meanwhile, the U.S. Department of Housing and Urban Development (HUD) has a far more limited scope, not recognizing those who experience homelessness by temporarily living with others. It’s one reason why a city’s HUD-funded Point-in-Time count shows smaller homeless populations, as HUD only recognizes those who live on the street or in shelters.

By not recognizing the homeless status of those who temporarily stay with others, or double-up, HUD shut out nearly 59,000 Chicagoans experiencing homelessness from accessing the housing support they need.

Altogether, the 2018 homeless estimate is lower than the 86,324 people tallied in the 2017 estimate, released in 2019. Most of the decrease is due to methodological changes in how doubled-up homelessness is defined in the CCH analysis. That leaves an amended count of 81,280 people who experienced homelessness in 2017.