Educational inequality and homelessness were not foreign concepts while growing up on the border of a city that has survived years of corruption, racial discrimination, and disregard. Still, while these were normal parts of life in Detroit, I was privileged to attend private school, live in a stable household, and know where my next meal was coming from. While I’ve always held closely the issues affecting Detroit, it wasn’t until recently that I realized just how close these issues were to me when I discovered that my own brother had been homeless. 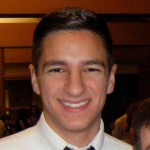 When I was very young, my half-brother, who has encountered vast racial and educational discrimination while being raised solely by my mother, moved into our basement for a year with his girlfriend and son. I remember thinking at the time, “That’s just what families do.” While this scene is common within many households, it wasn’t until I began working with the Homeless Education Committee within the Chicago Coalition for the Homeless that I realized my brother was technically homeless, according to the definition of homelessness used in the public school system.

As I peel back the layers of my motivation, I continue to find ways that I can more deeply connect with those I work with on this issue. I believe that as I have continued to understand my brother’s experience, it has allowed me to develop a greater insight into my own lens of justice, equity, and privilege as well as my motivations for organizing around this human rights issue.

Andy Greenia will graduate in December from Loyola University Chicago, where he majored in sociology, urban studies and peace studies. He interns with CCH, works as an assistant in the Department of Student Leadership Development, and is an academic coach at Target New Transitions.