A men’s homeless shelter on Chicago’s North Side is scheduled to close days before Christmas, and staff members are reckoning with the reality that many participants lack options as the weather turns dangerously cold.

North Side Housing and Supportive Services’ Interim Housing Program for Men, at the Preston Bradley Center in the Uptown neighborhood, aims to close its doors for good Dec. 23. The service provider had hoped to transition each of the program’s 72 residents to new housing a full week before the closing.

“If I sit up here and grieve, my mind will be telling me to pull me down,” said Darren Henderson, who was among the last men staying at the transitional housing program.

Henderson, who he will move to another interim housing shelter in the Washington Park neighborhood on the South Side, credits the Uptown program with helping him turn his life around after he got out of prison in 2013.

Henderson, 53, now works a full-time job at a plastic housewares company in suburban Elk Grove Village. He said he is glad he will have a place to stay and that it will be close to public transit.

But he will be losing the case manager who has helped him.

“I’ll have to start all over again,” Henderson said. “Like, introducing myself and sitting down and talking to that person again.” 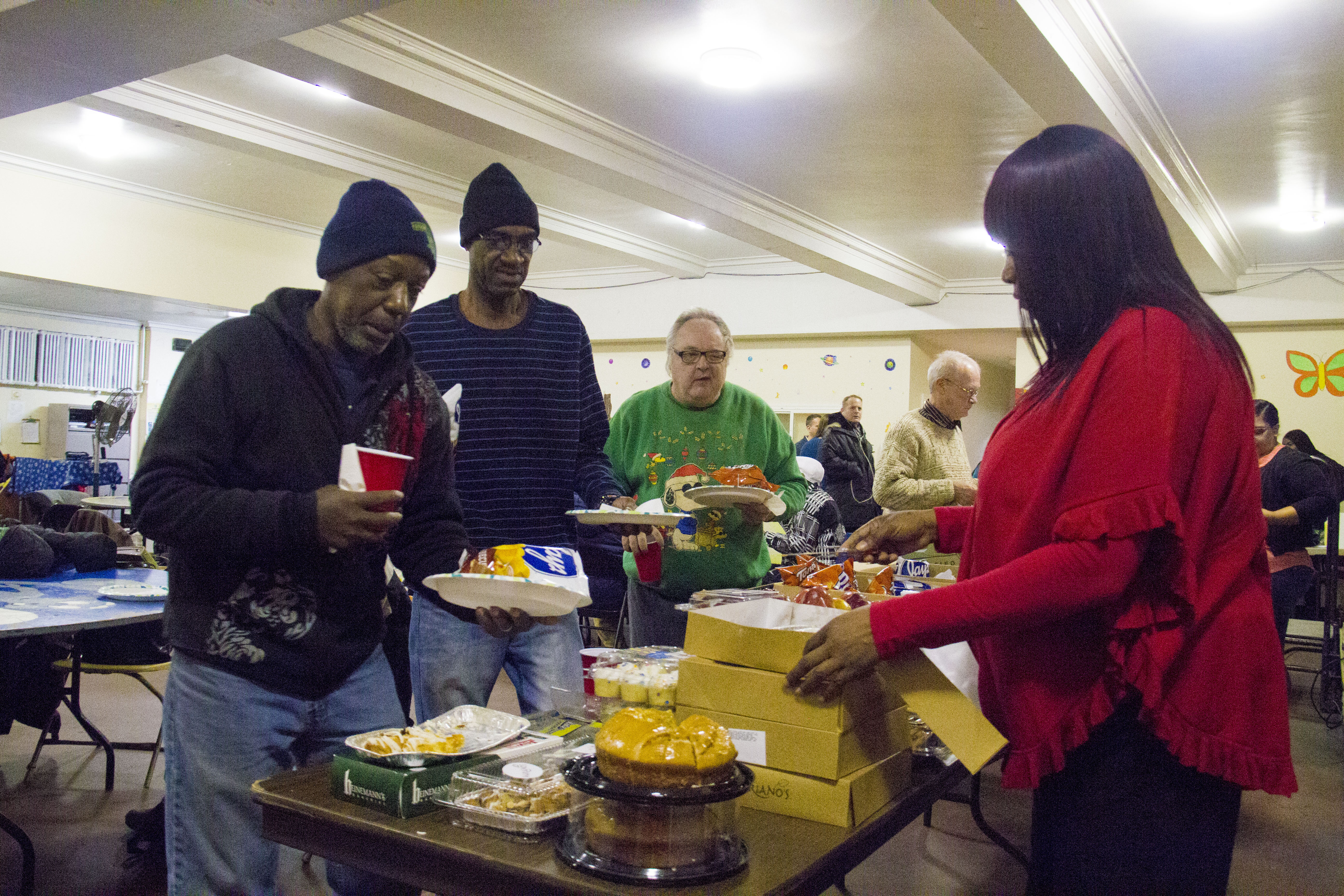 Current and former residents line up for food at a farewell luncheon the shelter hosted. The fare included chips and an assortment of holiday desserts. (Paula Friedrich/WBEZ)

The shelter held a farewell luncheon this month for current and former residents. Visitors grabbed sandwiches and chips, and perused a table of free items that staff were giving away, including socks, soap and towels.

“We’re closing, so we’re getting rid of all of our items that we had in my office and in my supervisor’s closet,” said case manager Ava Williams.

In another room, the men got free haircuts.

Jeremy Humbracht stopped in for a trim. Just three days earlier, he lived at the shelter, but staff found him his own apartment. 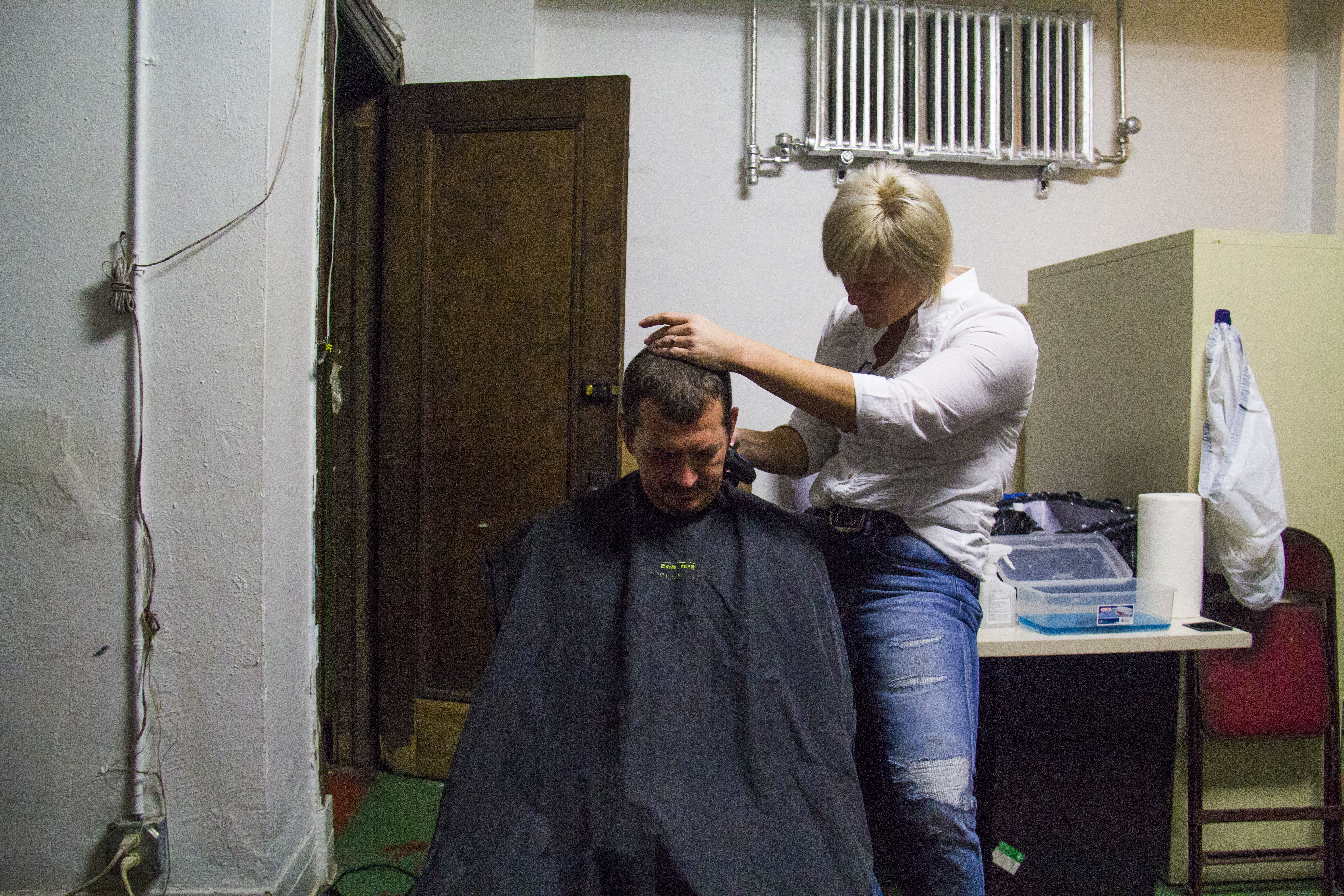 Jeremy Humbracht gets a haircut as part of the shelter’s farewell luncheon for current and former residents. (Paula Friedrich/WBEZ)

Humbracht said he is still trying to make sense of the shelter’s closing.

“This place meant hope,” he said. “Things were looking kind of bleak for me for a little while, and… as soon as I got here, things started looking up and everything started falling into place.”

The program was unable to raise about $100,000 in private money it needed to qualify for $400,000 in public funds, which make up the bulk of its budget.

“There are several shelters in Uptown,” said Martin Sorge, executive director of Uptown United, an organization that works with businesses and nonprofits to facilitate economic development in that neighborhood. “It is a hard thing to raise money for, and they’re not the only ones who’ve faced a challenge.”

Sorge acknowledged that the visible homeless population has become a point of tension in the community over recent years, but said nobody is pleased to see a shelter close.

“We’re just really concerned for anyone who has to be living outside in the circumstances of the winter,” he said. “You don’t want anyone to ever have to live like that.”

Henderson said he is troubled that a city like Chicago cannot muster the resources to keep the Uptown shelter open.

“That’s showing me that people don’t care,” he said. “That’s the bottom line. They don’t care.”

Many residents and staff said the shelter was unusual in Chicago. While it aimed to help participants achieve their own housing within 120 days, it also afforded them an unusual degree of flexibility, they said. Many transitional housing programs in Chicago require participants to follow strict rules, such as mandatory check-out times each morning and sobriety requirements.

“We have Wi-Fi for the guys. We wash their clothes. They don’t have to get up and leave in the morning,” said resident aide Sherman McGee. “They actually can sit in here all day if they want to — every day, seven days a week, 24 hours a day.” 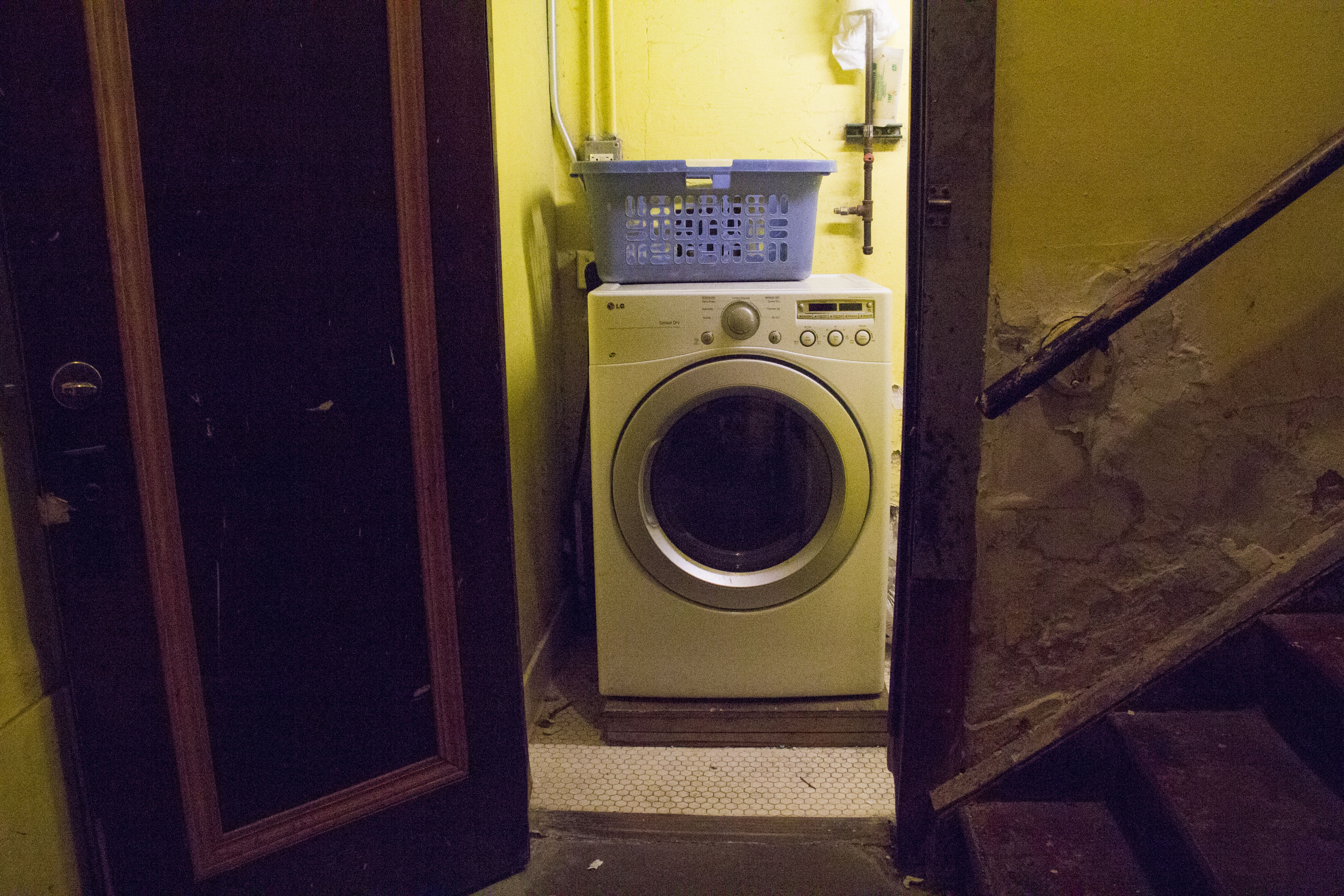 McGee added that the shelter welcomed participants regardless of whether they were fighting substance abuse issues.

The loss of 72 transitional housing beds comes at a time when many advocates say resources for Chicago’s homeless are already inadequate.

“There hasn’t been an increase in the amount of money that they receive for providing services to homeless folks since 2012,” said Eithne McMenamin, associate director of policy at the Chicago Coalition for the Homeless. “And every year they’re asked to do more with effectively less money.

According to data collected by the U.S. Department of Housing and Urban Development, the number of emergency shelter and transitional housing beds for adults in Chicago has not changed much over the last decade, from 2,875 in 2007 to 2,854 in 2016. Over that same period of time, the federal “point-in-time” count of homeless individuals in Chicago also has remained relatively flat, dropping from 5,979 in 2007 to 5,889 in 2016.

A 2014 to 2015 coalition estimate, which included individuals “doubling-up” in the homes of other family or friends due to hardship, estimated that as many as 125,848 Chicagoans were homeless. Additionally, McMenamin said looking simply at the number of beds over time does not tell the full story about available shelter for the homeless.

“Where are those beds? Are they best located to serve the people who need them?” she said. 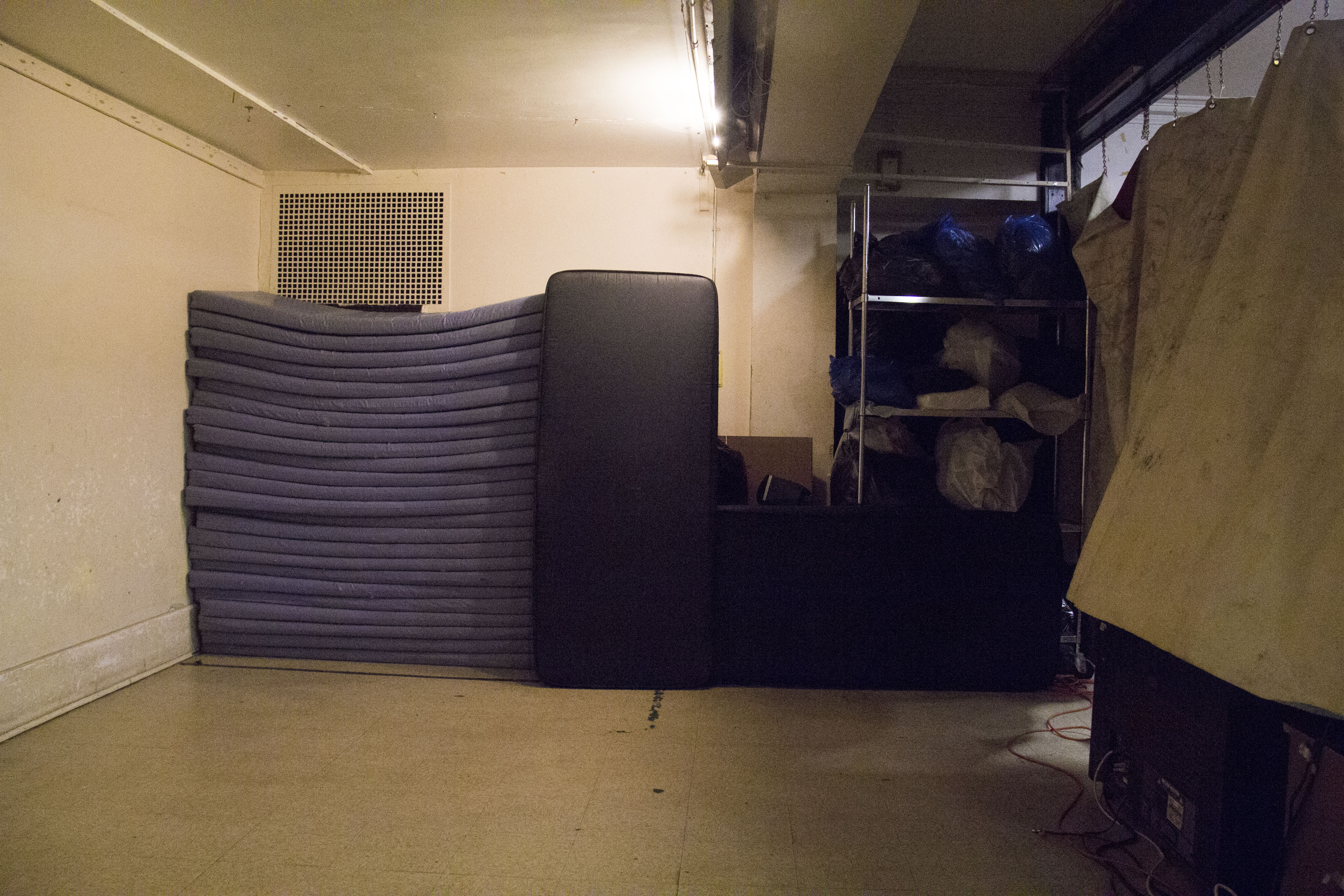 Cots at the shelter were stacked against a wall every morning and pulled out in the evening for use. (Paula Friedrich/WBEZ)

Richard Ducatenzeiler, executive director of Northside Housing and Supportive Services, said it becomes “harder and harder” to find shelters on the North Side.

Ducatenzeiler said his organization, which also manages permanent supportive housing units all over the city, rarely finds new units available on the North Side because rents are too high. But there’s a risk in placing people in available units on the West and South sides, where they may be farther away from their support networks and unable to access public transit.

“A lot of times we’ve had participants actually vacate their units and leave to go to a shelter that’s maybe on the North Side,” he said.

Ducatenzeiler said his organization has found new housing or shelter for 31 of the 72 men who were in the Uptown program.

Of the others, some have gone to the hospital, some are with family or friends. Others, he said, just stopped showing up, with no word as to where they have gone.

Cate Cahan contributed to this report. Odette Yousef is a WBEZ reporter.