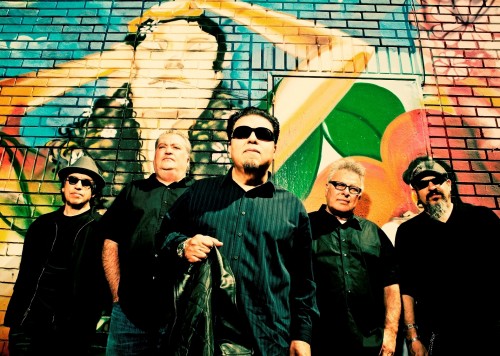 Our Hopefest benefit at the Park West was many things: a sold-out concert headlined by Los Lobos, a successful fundraiser, and a memorable evening of music with several notable special guests.

Local favorite Rollover started the June 1st evening with an electrifying set. Over the course of an hour, they welcomed many guest musicians to share the stage with them: Todd Park Mohr from Big Head Todd and the Monsters, blues saxophonist extraordinaire Eddie Shaw, and six-time Grammy winner Buddy Guy.

Between acts, our guests were treated to a short but entertaining live auction of music memorabilia conducted by Jeff Brown of Ace Auctioneers. Guitars signed by Buddy Guy and Los Lobos as well pieces signed by B.B. King and other blues legends were available to the highest bidder.

WXRT’s Vice President of Programming, Norm Winer introduced the headlining act: “WXRT has been around for 40 years, and Los Lobos has been there for the last 30 of them. They are the quintessential American touring band, evolving artistically while remaining true to their humble roots,” he exclaimed to the capacity crowd. Mayor Rahm Emanuel can surely be counted among Los Lobos’ notable Chicago fans; he attended the show with his family.

Headlining act Los Lobos gave it their all on stage, first performing their much beloved album Kiko from start to finish. The band graciously invited local musicians from Pilsen to sit in with them as well, building further on their exciting sound. The crowd called them back for an encore which did not disappoint.

The evening would not have been possible without the generosity of our presenting sponsor, the Chicago law firm of Butler, Rubin, Saltarelli & Boyd. Credit is also due to longtime corporate supporters Chase Bank, Radio Flyer and Shure Microphones – this underwriting allows CCH to stage such great concerts.

Nothing beats being there in the room of course, but thanks to our volunteer photographers Jeff Foy and James Townsley we have some captivating shots of the night. We’re still loading photos, so check back on our Facebook page.

Presented in partnership with our Lead Sponsor:

And our other Hopefest Sponsors: