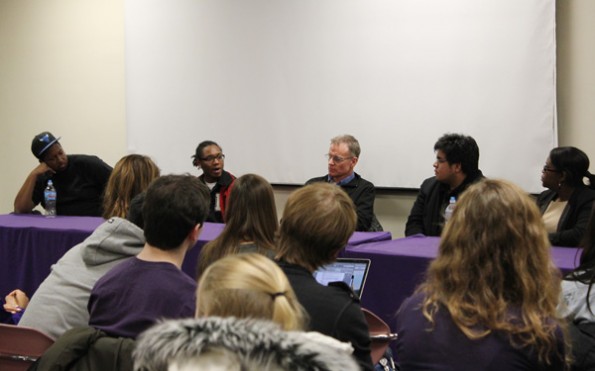 Sheil Catholic Center and Chicago Coalition for the Homeless co-sponsored a panel Wednesday featuring homeless and formerly homeless youth who spoke about their experiences. The event was meant to engage Northwestern with the homeless community.

Sheil Catholic Center joined the Chicago Coalition for the Homeless to sponsor a panel Wednesday discussing the often overlooked problem of youth homelessness.

About 40 people gathered to hear the panel discussion at Norris University Center. The panel included four homeless or formerly homeless speakers, as well as Father Dave Kelly, who works with homeless youth at Precious Blood Ministry of Reconciliation.

“If you bring awareness you help bring advocacy,” said Tim Higgins, a campus minister at Sheil Catholic Center. “I think when people think of homelessness they don’t necessarily think of women, children and youth.”

The panelists spoke about their experiences with homelessness as young adults, adults and advocates. They addressed the ways homelessness relates to mental health, subsidized housing and incarceration. After the panel discussion, students and other attendees broke into four groups to discuss homelessness with panelists and facilitators.

Carol Li, a Weinberg senior and fellow at the Center for Civic Engagement, was one of the moderators, along with JD Klippenstein, a community organizer at the Chicago Coalition for the Homeless.

“We have a very limited viewpoint on homelessness at Northwestern,” Li said. “This panel breaks down those stereotypes.”

According to Klippenstein, homelessness is an especially difficult problem when youth are affected.

“In the city and the state, there’s a gap in resources for homeless youth,” Klippenstein said, citing the limited number of beds in homeless shelters devoted to youth.

Klippenstein emphasized the importance of a panel dialogue to raise awareness and broaden the discussion on homelessness.

“The first step in doing anything about it is talking about it,” Klippenstein said.

Ashley Allen, a formerly homeless speaker for the Chicago Coalition for the Homeless, said one of the biggest struggles she faced as a homeless youth was the prospect of embarrassment and the constant fear people would find out.

“I didn’t want to tell people I was homeless,” Allen said. “Not teachers, not friends. I felt like I was living two lives.”

Allen said she had to keep friends at a distance to make sure they did not find out she and her mother were homeless. However, she said she is lucky she and her mother could stay together. Homeless young men over the age of 14 often are not allowed to stay in homeless shelters with their mothers, which splits up families and forces young men out on their own, Kelly said.

She said the nature of the problems facing homeless youth is largely systemic.

“You have young people who are struggling to find a place to live and go to school, but you don’t have a society supporting them,” Kelly said.

Allen also spoke about how homelessness during youth can have a lifelong impact. The uncertainty of not having a place to live — and trying to hide it — can have ramifications even after these youth find a home.

“This is a traumatic situation,” Allen said. “You’re stunting young people’s growth — that’s the reality of it.”

Mitchell Steinfeld, a Medill senior, said the event gave him new ways to focus in on homelessness, and the panel format provided different perspectives on how to tackle the issue.

“I learned a lot about how the Northwestern community is engaging with homelessness,” Steinfeld said.