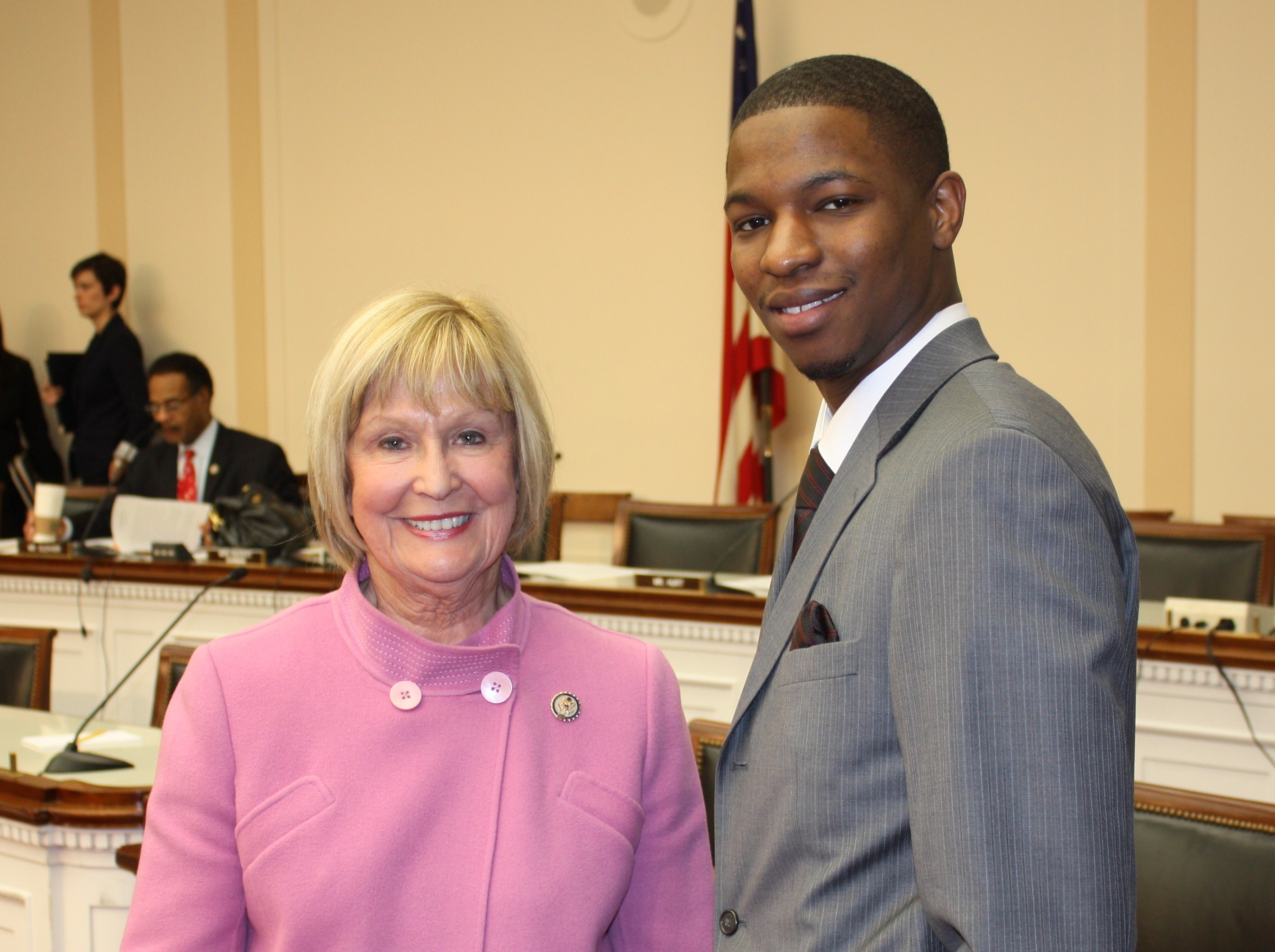 It was an exciting and inspiring day in Washington D.C. : Brandon Dunlap – recipient of a CCH college scholarship in 2005 – was invited to testify at a Dec. 15 hearing on child and youth homelessness, held by the U.S. House of Representatives’ Financial Services Subcommittee on Insurance, Housing, and Community Opportunity. 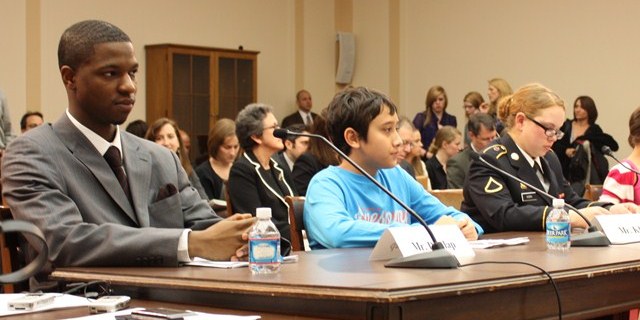 With the assistance of renewable scholarships provided by CCH and other organizations, Brandon, 25, earned his bachelor’s degree from Kendall College. Brandon is employed by the Union League Club of Chicago, where he worked throughout college.

Brandon was one of six current or formerly homeless children and youth witnesses testifying at the hearing chaired by U.S. Rep. Judy Biggert (R-Hinsdale). The young panel of witnesses gave first-hand accounts of the challenges of homelessness, especially their experiences of living doubled-up with others. I was honored to accompany Brandon to the hearing, and was moved by the compelling testimony he and the other witnesses provided.

(The photo on the home page shows Rep. Judy Biggert with Brandon Dunlap.)

Brandon testified in support of the Homeless Children and Youth Act of 2011 (H.R. 32), introduced by Rep. Biggert. H.R. 32 is a simple, one-page bill that would amend definition of “homeless” used by the U.S. Department of Housing and Urban Development so that HUD includes children, youths and their families who are verified as homeless by personnel from four federal programs, including school district homeless liaisons. It would allow homeless children and youth, especially those who are doubled-up and living in motels, to access HUD homeless services and housing.

Brandon spoke of his experiences as an unaccompanied youth, forced to live on his own without family. During his last two years at Curie High School, Brandon had to move every few nights among the homes of seven different relatives or friends.

“I would have loved someplace that was safe, warm and consistent to live – a healthy place to do homework, go to school, work, eat and live my life,” Brandon said.

U.S. Rep. Danny Davis (D-IL) attended the hearing and, along with other Subcommittee members, commended Brandon for his accomplishments and for sharing his experiences. Rep. Davis also noted the efforts of CCH in addressing the issue of homelessness in Chicago.

After the hearing, Brandon and I had the opportunity to have lunch with Rep. Biggert, her staff and some of the other witnesses and attendees at the hearing. We were pleased to hear more about Rep. Biggert’s efforts to ensure that all children in unstable housing situations have a chance to access HUD homeless services and to access a stable education.

We then met with U.S. Rep. Jan Schakowsky (D-Evanston), along with Starnica Rodgers, a Truman College freshman and another youth witness from Chicago, and Nicole Amling of the Chicago Alliance to End Homelessness. Brandon lives in Rep. Schakowsky’s district., and Brandon and Starnica spoke with her about their testimony. Rep. Schakowsky signed on as a co-sponsor of H.R. 32 on the day of the hearing.

While speaking to Rep. Schakowsky outside the House chamber, she introduced our group to Minority Leader Nancy Pelosi. Rep. Pelosi thanked Brandon and Starnica for coming to Washington to share their experience. We also had the chance to meet and talk to U.S. Rep. Robert Dold (R-Northbrook).

Next, we participated in a meeting with U.S. Sen. Tom Harkin (D-Iowa). Sen. Harkin is chairman of the Senate Committee on Health, Education, Labor and Pensions as well as the Chairman of the Appropriations Subcommittee on Labor, Health and Human Services, and Education. Several of the witnesses from the hearing along with other homeless children and youth from Florida took part in the meeting. Senator Harkin was very engaged with each of participants in the meeting and interested in learning about more about their barriers to housing.

Thanks to Barbara Duffield and the National Association for the Education of Homeless Children and Youth for coordinating the events for the children and youth in the afternoon and assisting in preparing the witnesses.  Brandon was happy to share his story with members of Congress in the hopes that other young people do not have to go through what he went through. He summed up the day by saying, “It is amazing that my story may make a difference in changing a federal law and may help other kids who are now in a homeless living situation.”

To read Brandon’s written testimony or to view an archived webcast of the hearing, see: http://1.usa.gov/rufLKw