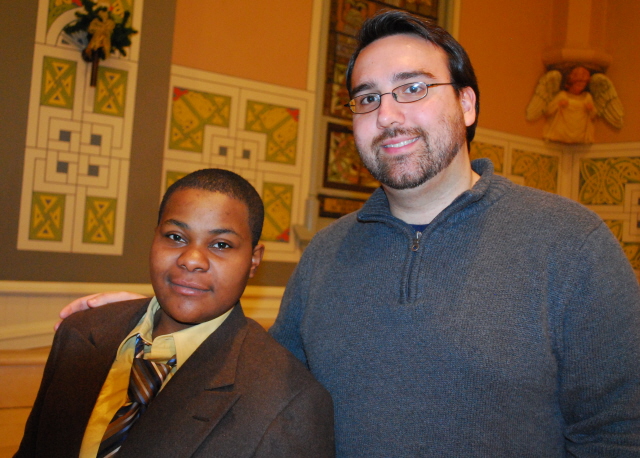 More than 400 people filled Chicago’s Old St. Pat’s Church Wednesday evening for a service to remember those who died while homeless in our city.

Among the speakers, a recently homeless young woman spoke poetically about life on the street.

“Based on my appearance, would you guess all the dark places I have been? Places without hope, where seeds of love fail to grow,” said Shon Robertson.

A former state ward, the 24-year-old lived on Lower Wacker Drive for three years. This fall, Shon found a job in a youth program and now rents a home with friends she met in the Occupy Chicago movement. 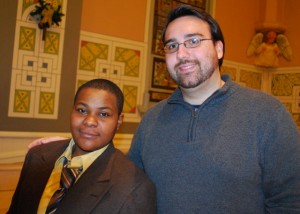 Shon volunteers at CCH through community organizer Jim Picchetti. (Shon is shown with Jim above.) They met while Jim was working with a Friday night street outreach project run by North Park University.

The names of 50 homeless people who died in 2011 were read during the service in the impressive sanctuary at historic Old St. Pat’s, 700 W. Adams. The service included music from the Harmony, Hope & Healing choir, and remarks by the executive directors of CCH and the Ignatian Spirituality Project, Ed Shurna and Tom Drexler.  Our two organizations first hosted the joint service last year.

More than 150 communities across the U.S. marked Homeless Memorial Day, They include downstate Belleville and Rockford, and suburban Palatine, where Journeys from PADS to HOPE held a memorial service this morning.

Homeless Memorial Day is held on the first day of winter, “the longest night of the year.” National Coalition for the Homeless in Washington, D.C. mobilizes the event, now in its 22nd year.