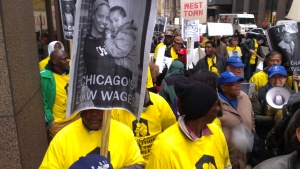 November 11 – A week after the election, Chicago community leaders rallied to “Take Back Chicago.”

Following a noon rally for 1,000 people that filled the Chicago Temple, 77 W. Washington, an estimated 800 marched to the Chicago Board of Trade for a second rally.

Organizers with the Chicago Coalition for the Homeless (CCH) mobilized 85 homeless community leaders to participate. Equal Voice News was among the media outlets that reported on the event.

On Election Day, Illinois voters clearly stood in favor of economic justice. They sent a clear mandate voting by a 2-to-1 margin to increase the state minimum wage and overwhelmingly supported putting more money into education by taxing the super rich.

The Take Back Chicago Coalition, convened by the Grassroots Collaborative, calls for: 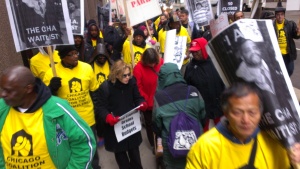 * Passage of an increased Illinois state minimum wage of $10.65 during the Springfield veto session.

* A $15 city minimum wage that includes all of our neighborhoods and does not leave out tipped and domestic workers.

* An elected representative Chicago school board to give Chicago parents a voice in our schools. An elected school board would allow parents to vote for the people that control the school budget, like in every other city in Illinois.

* Immediate reform of the Chicago Housing Authority. Currently, the CHA is sitting on a stockpile of money that should be putting Chicagoans into homes before another brutal winter. It’s time that we pass the Keeping the Promise ordinance to hold CHA accountable and allow for greater transparency.