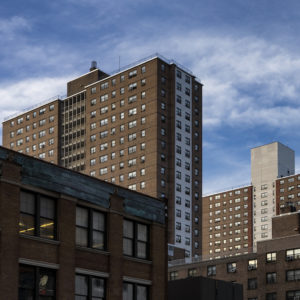 In Cook County, limited exceptions exist only in cases where a tenant “poses a direct threat to the health and safety” of other tenants or an “immediate and severe risk to property” (First Municipal District, Extending General Order 2020-23).

At least half a million Illinois households could be at risk of eviction–a crisis disproportionately impacting Black tenants. In Chicago, landlords evict tenants far more often in majority Black neighborhoods, per recent data collected by the U.S. Census. Black and Latinx tenants are also more likely to have an eviction case result in their eviction.

Illinois joined at least seven other states in extending moratoria as the number of people at risk of homelessness continues to rise. Arizona, California, Kentucky, Massachusetts, Montana, New Jersey, and New Mexico continue to have protections against evictions.

The eviction moratorium does not relieve the obligation to pay rent, nor reduce the amount owed to a landlord. And though past-due rent is still required, tenants have the opportunity to prevent an eviction order with full payment of past-due rent (known as a “cure”) or another formal agreement with their landlord.

While CCH applauds the Governor’s move to extend eviction relief, it is not a permanent solution, and the need for more housing support will continue. Rental assistance programs through both the Illinois Housing Development Authority and the City of Chicago are providing critical support, but this funding is not enough to assist the thousands of individuals and families struggling to remain housed.

In April, 83,000 Chicagoans applied for just 2,000 available rental assistance grants made available through the City of Chicago Department of Housing. In other words, less than 2.5% of applicants received relief. The need was citywide, with no more than 3% of applicants from a single ward.

In May, CCH raised $170,000 for a Mutual Aid Fund providing emergency grants of up to $500 to about 340 Illinois households impacted by homelessness. More than 6,000 people applied for assistance during the 5-day application period, further demonstrating the urgency for increased investment in housing and homeless services.

Chicago Coalition for the Homeless estimated 76,998 Chicagoans experienced homelessness pre- COVID–19, per an annual analysis by CCH that relies on the most current U.S. census data. Though the city’s overall homelessness count decreased from the prior year, Chicago saw a nearly 2,000-person increase among those who lived on the street or in shelters. It is a development with troubling connotations today.

Without continued investment in solutions, homelessness in Illinois is expected to climb during the worsening economic downturn caused by COVID–19.

CCH grassroots leaders and staff continue to advocate for needed critical funding and protections at the federal, state, and city levels.