By Mary Tarullo, Associate Director of Policy, Chicago Coalition for the Homeless 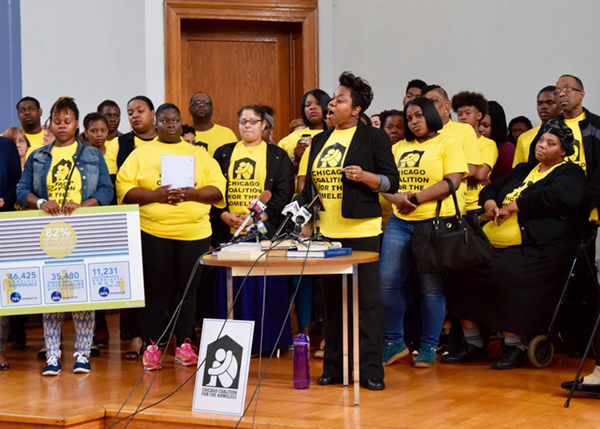 HomeWorks, a housing and schools campaign spearheaded by the Chicago Coalition for the Homeless (CCH), is working with the city of Chicago to launch a program to provide housing for homeless families with children.

Among its innovations, the program will include doubled-up families – those seeking shelter with other people – after assessing the most vulnerable among 264 homeless families identified at the six schools. It marks the first time that local housing dollars will serve doubled-up Chicago families.

Announced in April, the program will offer permanent housing and supportive services to 100 homeless families from six Chicago elementary schools in high-crime neighborhoods.

“We are thrilled that the city committed a new resource for housing for homeless families, and in particular, that it recognizes the needs of highly vulnerable doubled-up households that previously have not been able to receive housing and services,” said CCH Executive Director Doug Schenkelberg.

HomeWorks organized in mid-2015 to advocate that the city prioritize addressing family homelessness, including school services and the needs of doubled-up families, just as veteran homelessness was prioritized a few years ago.

Housing Homeless Families will be funded by a $1 million yearly investment from the Chicago Low-Income Housing Trust Fund, with $900,000 from the city’s new house-sharing (Airbnb) tax. 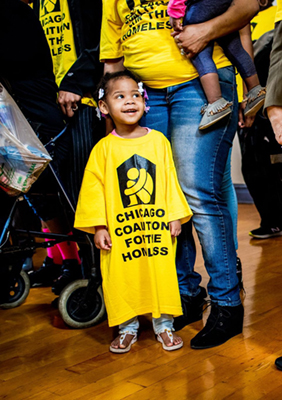 Last year, HomeWorks worked with the mayor’s office and the Chicago City Council to enact a 4 percent surcharge on the house-sharing industry, making Chicago among the first municipalities to leverage a dedicated funding source for homelessness. CCH also pushed for the housing trust to dedicate new housing resources after CCH helped secure the release of escrowed funds owed the rental housing support program.

The city and family housing providers will identify families, working closely with shelters specializing in family services and with the Chicago Public Schools.

Families identified for the program will receive housing vouchers and be matched to a provider who helps them locate housing, ensuring a smooth transition.  Housing navigators will help families get to appointments and obtain required documents for their housing applications. Families will continue to work with providers as they receive wraparound services to support them in maintaining permanent housing.

In a press conference to announce the new program, CCH released a report on doubled-up homeless families in Chicago. The report shows that 82% of homeless people living in Chicago in 2015 sought shelter with relatives and friends, or doubled-up. To assess the size of Chicago’s homeless population, CCH developed a new methodology using U. S. Census data. This method also provides a more precise understanding of how many families are doubled-up.

The report shows that 82,212 people were homeless in Chicago in 2015, an unduplicated count. Eighty-seven percent of homeless families (8,634 families) with children were doubled-up.

CCH also found that 44% of homeless families served by the emergency shelter system had doubled-up with friends or family, either prior to or after entering the shelter system within that year. This shows many families experience both types of homelessness, cycling in and out of shelters and the homes of others. 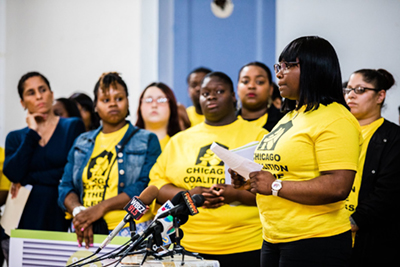 They include families like Chrishauna Thompson’s. Her family became homeless after Chrishauna’s mother suffered a back injury, leaving her unable to work two caregiver jobs. Over the next four years, Chrishauna, 17, changed schools nine times as her family doubled-up with different relatives.

“Doubled-up is homeless,” said Chrishauna. “I never had a key. I didn’t have privacy. A lot of times I was late for school waiting for a shower. I was worried that we could be put out at any time.”

As of now, there is no path for doubled-up families to access the housing resources made available to families in shelters. The U.S. Department of Housing and Urban Development (HUD) uses a limited definition of homelessness that includes people at “a supervised publicly or privately operated shelter… (or) a public or private place not designed for a regular sleeping accommodations for human beings.” 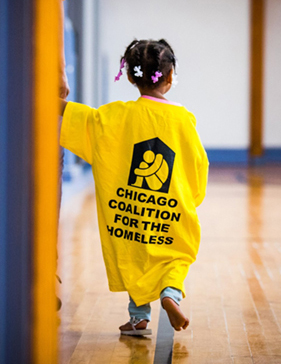 “Most of our families have spent years without secure housing, sleeping on couches or floors, never sure if they’re going to have a place to stay the next night,” said LaTanya Gray, senior director of early childhood for the Primo Center for Women and Children. Newly relocated to the city’s South Side, the Primo Center provides housing and services to over 500 homeless families in Chicago a year.

Working with children from birth to age 5, Gray says she sees the impact of homelessness on young children. Many suffer from anxiety.

“They’re angry and sometimes act out. Their young lives have been so chaotic,” Gray explained.

Editors note: Public schools, early childhood programs, and other federal programs use a definition of homelessness that does include families who are staying with others temporarily because there is nowhere else to go (doubled-up). The Homeless Children and Youth Act (H.R. 1511/S. 611) would amend HUD’s definition of homeless to include children and youth who have been determined to be homeless by these federal programs. The legislation would require HUD to honor local communities’ priorities, including by allowing using HUD homeless assistance to assess and serve these families and youth.