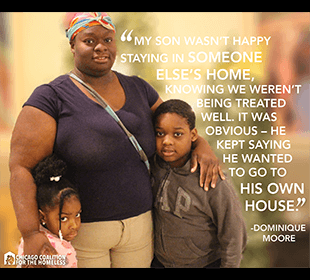 An analysis by Chicago Coalition for the Homeless (CCH) shows that 82% of homeless people in Chicago in 2015 sought shelter with relatives and friends, also known as being “doubled-up.”

By November, 75 families were identified as qualifying for permanent housing through the program, known as Housing Support for CPS Families in Transition, or FIT.

FIT is the first city-funded housing program to include homeless families who live doubled-up in the homes of others, often in overcrowded and unstable conditions.

“The city of Chicago is committed to helping families in every neighborhood work, thrive and provide for their own, because no child should be worried about where they are going to sleep at night,” Mayor Rahm Emanuel said when FIT was announced. “Our partners at the Chicago Coalition for the Homeless share in this vision, as demonstrated by their unwavering advocacy on behalf of Chicago’s students and families. I want to thank them for their partnership on a new program to house 100 of our most vulnerable families this summer.” 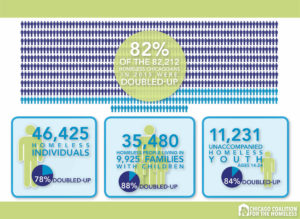 To assess the size of Chicago’s homeless population, CCH developed a new methodology using U. S. Census data.  This method also provides a more precise understanding of how many families are doubled-up.

The report shows that 82,212 people were homeless in Chicago in 2015, an unduplicated count. Eighty-seven percent of homeless families (8,634 families) with children were doubled-up.

CCH also found that 44% of homeless families served by the emergency shelter system had lived doubled-up with friends or family, either prior to or after entering the shelter system within that year. This shows that many families experience both types of homelessness, cycling in and out of shelters and the homes of others.

Chrishauna Thompson’s family became homeless after her mother suffered a back injury, making her unable to work her two caregiver jobs. Over the next four years, Chrishauna, 17, changed schools nine times as her family doubled-up with different relatives.

“Doubled-up is homeless,” said the teen. “I never had a key. I didn’t have privacy. A lot of times I was late for school waiting for a shower. I was worried that we could be put out at any time.”

As of now, there is not a path for families seeking shelter with relatives and friends to access the housing resources available to families in shelters. The U.S. Department of Housing and Urban Development (HUD) uses a limited definition of homelessness that includes people at “a supervised publicly or privately operated shelter… (or) a public or private place not designed for a regular sleeping accommodations for human beings.”

“Most of our families have spent years without secure housing, sleeping on couches or floors, never sure if they’re going to have a place to stay the next night,” said LaTanya Gray, Senior Director of Early Childhood for the Primo Center for Women and Children.  Newly relocated to the South Side, the Primo Center provides housing and services to over 500 homeless families in Chicago a year.