Chances are you won’t see one of the nation’s fastest growing homeless populations camped out on a park bench or queuing up at a local shelter. One in 30 of American children is homeless—an all-time high of 2.5 million, according to a new report by the National Center on Family Homelessness (NCFH). But these kids are often invisible, crashing with their families on friends’ couches, sleeping in all-night diners or hopping from motel to motel from week to week.

Some states have begun to focus on helping such children, but their efforts are being complicated by the way the federal government counts them.

Advocates for the homeless argue that HUD’s definition of “homeless” is particularly problematic, because it excludes more than a million homeless kids, making it almost impossible for state and local policymakers to use federal money to help them.

A recent report by the Institute for Children, Poverty and Homelessness (ICPH) found that HUD’S Continuum of Care (CoC) competitive funding application process affects the way communities deliver services to homeless children and families. The report found that HUD has prioritized converting homeless programs from ones that provide transitional housing accompanied by social services, which typically help families, to programs that provide, permanent, supportive housing or rehousing, which usually target chronically homeless adults.

Many homeless children “can’t get the full range of shelter services, food assistance and counseling to manage the trauma of being homeless—and they can’t get it because they’re kids,” said Ed Walz, vice president of the nonprofit First Focus Campaign for Children.

HUD officials say their “point in time” count of the nation’s homeless is just that, a snapshot of people largely living in the street on one night in January, typically the coldest time of the year. The agency is looking at a variety of data to measure the homeless crisis, said Jennifer Ho, HUD’s Senior Advisor for Housing and Services.

“We’re all in agreement that the number of families with kids that need some type of housing assistance has gone up,” Ho said. “But the number of families who are in shelters or on the streets on any given night have actually gone down. I think they’re both true. And we all agree that there aren’t sufficient investments in affordable housing or services for anyone who’s homeless.”

“Child homelessness has reached epidemic proportions in America,” said Carmela DeCandia, NCFH director. “But the nation hasn’t really prioritized family and child homelessness. …How are we going to target resources if we’re not on the same page about the size of the problem?”

Ho said that Congress has “aligned” with Obama on helping homeless veterans. “But we have not seen the same degree of support for the work we want to do around families. There is an affordable housing crisis in America. We need to deal with that underlying crisis.”

Poverty, of course, is the great driver of homelessness. Homeless children are typically part of a family headed by a single mother in her 20s who has limited education and a spotty employment history—and who usually has a history of trauma, such as domestic violence. Many avoid going to shelters for as long as possible because they don’t want to expose their children to shelter life or they are afraid the family will be split up.

“They are the group at greatest risk,” DeCandia said. “They’re feeling the lingering effects of the Great Recession. The recovery has not made it to that group.”

Factor in a severe affordable housing crunch, and vulnerable families easily “topple over the cliff,” DeCandia said. A 2014 report by the National Low Income Housing Coalition found that in no state is a full-time worker earning minimum wage able to afford a one- or two-bedroom apartment at a fair market rate.

“People are surprised that (homelessness) impacts children so much,” said Patricia Nix-Hodes, director of the Law Project at the Chicago Coalition for the Homeless. “It tends to be less visible. People call it the hidden homelessness. People aren’t literally on the street. They may be living place to place in some precarious situation, doubled up or living in a shelter.”

Fifty-one percent of kids without a permanent home are under age 6; about 25 percent of homeless preschoolers and 40 percent of homeless school-age kids have mental health conditions that require clinical evaluation. Kids without homes are more likely to be beaten and to be sexually trafficked, said Barbara Duffield, policy director for the National Association for the Education of Homeless Children and Youth (NAEHCY).

Homeless youth face unique challenges. Sometimes they are on their own, fleeing an abusive home; other times they are separated from their families who are also experiencing homelessness. By law, federally funded shelters can’t turn away families with boys older than 10 or 12. But privately funded shelters can and do turn them away, and in the process, break up families. Teens are often left to fend for themselves.

Over the past few years, Nix-Hodes of the Chicago homeless coalition said, she’s seen child homelessness in the city skyrocket. In the previous school year, there were nearly 60,000 school children in Illinois who were identified as homeless, more than double the 2008-2009 school year.

“We’re seeing this dramatic and shocking increase year after year and definitely no sufficient resources for housing, no sufficient support and funding for school districts to provide all the services the students are entitled to,” Nix-Hodes said.

In 2009, the Illinois state legislature earmarked $3 million for homeless school children. Since then, that line item was a casualty of the state’s tight budget, Nix-Hodes said, despite efforts by the governor and the state Department of Education.

Earlier this year, the California State Assembly passed legislation that would help transfer a child’s academic records from one school to another without requiring parental approval. Children fleeing an abusive home often have to move from school to school. The law would allow for a designated adult to sign any required paperwork, therefore encouraging the kids to stay in school.

But Assembly member Richard Bloom, a Democrat from Santa Monica who introduced the bill, said that he’d like to see more comprehensive efforts to address child homelessness in California.

“The real coordinated effort in the state of California is largely absent,” said Bloom, a former mayor of Santa Monica. “I’m almost embarrassed to look at the stats. California is in next to last place in policy and planning around homelessness. And that’s something that needs to change.”

In order to meet Obama’s goal to eradicate child and family homelessness by 2020, states need to step up, DeCandia said. The states that are more successfully managing child homelessness, including Utah and Connecticut, have an active interagency on homelessness to coordinate services for families, a state plan to combat the problem and a state housing fund.

“This report is a call to action for states,” Bloom said. “We need to focus resources on the very at risk children. We are going to be creating the next generation’s chronically homeless populations if we don’t address their needs now.”

At the federal level, advocates for child homelessness are pinning their hopes on the bipartisan Homeless Children and Youth Act, which was introduced in the Senate by Sen. Dianne Feinstein, a Democrat from California, in July. (U.S. Rep. Steve Stivers, an Ohio Republican, introduced a similar bill in the House at the same time.) If passed, the law would enable HUD to redefine homelessness to include more children and youth.

“The recession has changed the composition of homelessness in America,” said NAEHCY’s  Duffield. “The problem is HUD’s definition hasn’t changed with it.” 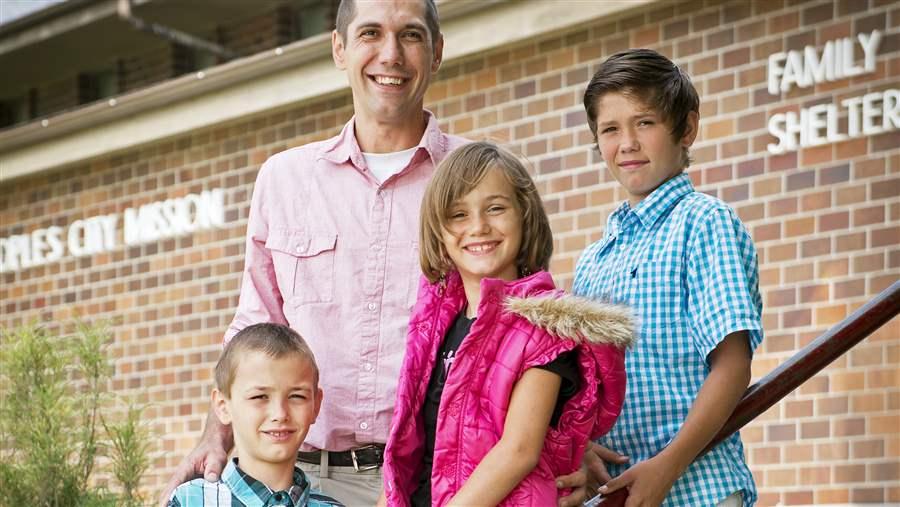 David Proctor, center, smiles for a portrait with his children, from left, Braden, 10, Kailee, 8, and Austin, 13, outside the People’s City Mission, their present home, in Lincoln, Nebraska. During the academic school year, Proctor’s children take taxi cabs provided by Lincoln Public Schools to get to school. (AP)