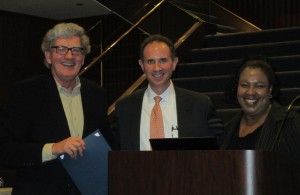 Every Child in School, Every Day kicked off its fifth year of collaboration between volunteers from JPMorgan Chase Bank and the Chicago Coalition for the Homeless.

A May 22 kick-off lunch drew 33 bank volunteers to learn more about this year’s outreach plans. After four years of focusing on the city’s Austin neighborhood, the project will target its 2013 outreach to teenagers – homeless and unaccompanied youth across Chicago, including youth who are not in school.

“We are unbelievably proud of this signature project, Every Child in School, Every Day. The name kind of says it all,” said Michael Lipsitz, General Counsel for Consumer and Business Banking, and chairman of Chase’s National Pro Bono Committee.

(Above from left, Dale Granchalek, Michael Lipsitz and Sharlita Davis)

Mr. Lipsitz noted that Chase project chair Sharlita Davis shows “an enthusiasm that is unstoppable.” Ms. Davis, a CCH Board member, coordinates Chase’s involvement in the school outreach program she helped found in 2009. This year’s outreach was planned by Ms. Davis with assistance from Molly Carpenter, General Counsel for Commercial Banking.

“We have volunteers from every line of business,” said Ms. Davis, Assistant Vice President and Contract Officer in the IP & Technology Law Group. “That says so much about this organization. We’ve been out in the rain, literally with no umbrellas, and people do it with smiles on their faces.”

“The fact is, the children appreciate it so much, and you really feel like you’re making a difference in people’s lives,” Riddle told her fellow volunteers.

Plans for 2013 include distributing at least 25,000 pieces of outreach material through programs that serve teens citywide, including youth not currently in school. CCH’s Youth Futures mobile legal aid van will offer 14 legal aid clinics for homeless students at nine high schools, including six clinics at Tilden, which enrolls more than 200 homeless students. Outreach materials explain to homeless teens that they have a right to enroll in school without delay, or that they can apply to waive school and graduation fees that often cost hundreds of dollars a year.

In four years of Austin-focused outreach, the West Side neighborhood saw large gains in the number of identified homeless students: 931 homeless students (preschool – 12th grade) were enrolled in Austin’s 27 schools in December 2012. In four years, Austin’s homeless student count increased almost two and a half times (247.6%) from 376 pupils in 2008. That increase is almost four times the 62% increase in Chicago’s citywide homeless enrollment over four years (totaling 17,255 by June 2012).

The 2013 kickoff included a talk by Sonovia Petty, a once homeless mother who works as an organizer for Chicago Legal Aid for Incarcerated Mothers (CLAIM). Ms. Petty described how she was a homeless teen mom who dropped out of high school, developed a drug addiction and eventually went to prison. Released in 2009, she met a CCH organizer through a shelter outreach program. Ms. Petty involved herself as a leader in the CCH Speakers Bureau, honed her job skills, and reunited with her children.

“I’ll be 40 this year. I’m not where I want to be, but I ain’t where I used to be,” she said, thanking the volunteers for helping other teens now coping with what she lived through.