Sara Stokes remembers well the night she became homeless. It was the end of January, but warm like spring. She and her boyfriend at the time, the father of her toddler, were fighting at their apartment. He swung her around, choked her and busted her lip, she recalled.

She had been living with her ex-boyfriend after her grandmother, who raised her, kicked her out, she said. When he fell asleep that night, she packed a bag of clothes and, certain he wouldn’t wake up, walked out the front door. With no place to go, she left her baby behind, where at least she knew he’d have a roof over his head.

Stokes’ grim experience is just one example of a growing number of youths who are homeless in Illinois.

Although an official count hasn’t been taken since 2005, data from the National Runaway Safeline and accounts from youth service providers in Chicago suggest that more and more youths — those about12 to 21 years old — are on their own. Those who work closely with homeless youths said a variety of issues prompt children and teens to run away or get kicked out. A slowly recovering economy and high unemployment has also added to familial stress, they said.

National Runaway Safeline Executive Director Maureen Blaha said the number of youths in Illinois contacting the hotline steadily increased over the past three years. And every year, more say that they’re homeless when they call.

Beth Cunningham, a youth attorney for the Chicago Coalition for the Homeless, said shelters she works with turn away children and young adults in increasing and “really disturbing numbers.”

At The Crib, a shelter for 18- to 24-year-olds in the Lakeview neighborhood, 9 p.m. is a stressful time. That’s when the 20 youths who will get beds that night are randomly chosen.

On a recent Monday, Lawrence Herbert, 19, originally from Evanston, lucked out. He’d have a place to sleep that night, but that’s not alwaysthe case.

A part-time cashier at an Evanston restaurant, he can’t make it to a shelter in time for check-in on the three nights each week that he works.

“There have been nights when I had to sleep on the train, in the cold, or I would like sleep in a park,” Herbert said.

Herbert said heleft home about two months ago after his relationship with his dad had become physically and verbally abusive. Herbert is gay, and he saidhis dad doesn’t accept that.

“It was unsafe,” Herbert said. “I couldn’t live there.”

More shelters have reached out to the National Runaway Safeline for help when they find themselves overflowing, according to nationwide hotline data. The hotline also recorded an increase in youths who call saying they’re homeless over the past decade — from 758 a decade ago to 1,956 in 2012. A slight increase in young people who call saying they’re already using shelters over the past year, from 655 to 730, was also recorded.

In Illinois, more than 10,000 young people called the National Runaway Safeline last year, a full 10 percent of U.S. calls and a 28 percent increase from 2009.

But the most accurate way to gauge the youth homelessness problem in Illinois and Chicago, Cunningham said, is with a point-in-time count.

This fall, the city plans to take one of homeless youth in Chicago, according to Julie Dworkin, policy director for the Chicago Coalition for the Homeless who’s helping prepare for the count.

A count of unaccompanied homeless youth in Chicago and the state hasn’t been taken since 2005, when the University of Illinois at Chicago, with funding from the Illinois Department of Human Services, took on the task. The survey estimated that there were about 9,000 unaccompanied homeless youth in the Chicago area in 2004 and about 25,000 statewide.

Dworkin said attempting to measure youth homelessness in the same way researchers measure adults — a random day’s count at shelters across the city — would be futile because some unaccompanied youths feel unsafe in adult shelters and find other ways to survive. Part of the effort will likely engage schools, she said.

“This would be more like an attempt to get as many youth as possible to respond over a one- to two-week period,” Dworkin said.

The root of the issue is multifaceted, said Cunningham and Paul Hamann, president of The Night Ministry.

Persistent problems with the child welfare system, the juvenile justice system and the Illinois Department of Children and Family Services contribute to youth homelessness, they said. Family issues, sharpened by continued economic stressors, are a major factor, too, they said. The No. 1 issue cited in calls to the runaway hotline is “family dynamics” at 29 percent.

Hamann said he’s seen an increase in the number of youth coming from intact families at the youth programs The Night Ministry runs, including The Crib.

“In the past, we mostly dealt with runaways, throwaways or lockouts,” Hamann said. “But when the recession hit, we started to see youths from intact (homes), with foreclosures. Some family shelters don’t take adolescents, and they had to make the conscious decision to split up.”

As families continue to face economic pressures, the city has made some attempts to alleviate the homelessness problem.

In August, Mayor Rahm Emanuel announced the city would begin adding 100 beds across the city designated for homeless youth. Chicago also expanded some youth shelter programs across the city, including The Crib, where Herbert and Stokes occasionally stay.

The two 19-year-olds plan to find permanent residences as soon as possible. Without a home or car, Stokes struggles to find a job. Herbert said it’s difficult to find reliable transportation for his job.

The hardest part about being homeless for Herbert, who’s also attending classes at Pivot Point beauty school, is not having a daily opportunity to shower.

Herbert hopes to get his cosmetology certificate and someday own his own shop. Stokes wants to find a job, “get stable,” take care of her son — whom she rarely sees — and marry someday.

Stokes said being homeless is a “low” she never thought she’d reach, but the humbling experience has made her evaluate who she is and what she wants.

“I have my whole life ahead of me,” she said. “At the end of the day, as long as I’m happy and at peace, that’s what really matters.”

(Below: Lawrence Herbert, 19, left home about two months ago after his relationship with his father had become abusive. Photo by Abel Uribe/Chicago Tribune) 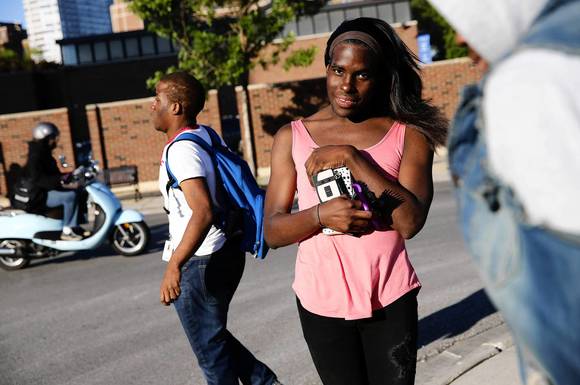