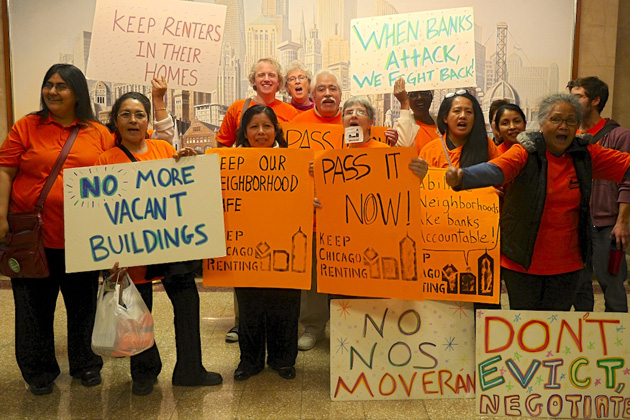 Renters and grassroots community advocates in Chicago scored a major policy win on June 5, when the City Council approved the “Keep Chicago Renting Ordinance” by a vote of 45 to 4.

The ordinance comes in response to evictions of apartment renters after buildings go into foreclosure because the owner is unable to cover the loan amount. The ordinance requires banks in Chicago that take control of foreclosed buildings to either act as the landlord and let apartment renters stay in their homes or pay a relocation fee of $10,600 to each displaced family, according to Demian Kogan, an organizer with the Albany Park Neighborhood Council (APNC).

This neighborhood in Chicago saw numerous cases of displaced families who were paying rent in their apartment building, which went into foreclosure. In 2011, APNC helped launch the “Keep Chicago Renting Coalition” to work on this issue and cooperated with 12 other groups.

They included the Logan Square Neighborhood Association, Chicago Coalition for the Homeless, Action Now, Lawyers’ Committee for Better Housing and Business and Professional People for the Public Interest. Kogan noted that Chicago is the second largest city in the country to enact this type of protection for renters.

Equal Voice News talked with Diane Limas, a community volunteer with APNC, about the problem, forming the Coalition and finding a policy solution. This interview was edited.

Q: Could you tell me about your background?

I’ve been involved with the APNC for about 12 years. I became involved when one of the organizers doorknocked where I lived and said: ‘Do you have any concerns in the community?’ Affordable housing has always been an issue that I’ve been passionate about. I come from a large family. I have 11 other siblings.

Q: Could you explain the rental issue?

As the foreclosure crisis hit Chicago, most of the concern was for homeowners. About four years ago, we had a health care leader come to our office and say: ‘Look at this notice I got. It says that I have to be out in 24 hours.’ He laughed. He had been living in the apartment for 25 years. He knew that everyone was paying their rent.

That’s when APNC started investigating. We saw the same thing happening to renters in other buildings. When we became involved, we said, ‘This is wrong.’ There was nobody out there protecting renters.

Q: So, what was happening?

The tenants in one building didn’t even know their building was in foreclosure. These were all immigrant families. They were paying. The owner had converted the seven-unit apartment into condominiums, not telling the tenants and took out a $2 million loan and left the country, leaving the tenants to fend for themselves. He secured loans on each condominium.

These were the types of stories we heard: The owner was paying on his original loan, but the bank made it easier to take a second loan. They were saying, ‘You can purchase this multi-unit building but your property will go up in value and you can refinance.’ But the property never gained any value, and the owner could never get that lower interest rate, or the banks would allow owners to take money against the building.

The original price of the building might have been, for example, $150,000. But by the time foreclosure came around, the owner might have owed $500,000. The families had nothing to do with getting loans. They paid their rent every month.

The banks threatened the tenants that they had to be out in 24 hours. They threatened to turn off the heat in the middle of winter. When the tenants were sleeping, they hired a locksmith and the locksmith came when they were sleeping and tried to change the locks. They would call the tenants and say, ‘You’re going to come home from work and all of your belongings will be out on the street.’

We knew we had to do something. We heard more stories. We had a list of buildings that just turned into bank owned. We doorknocked.

Q: What else did you and volunteers learn?

We had one elderly woman, whose unit went into foreclosure. They shut off the heat in the middle of winter. This elderly woman was heating her water through a rice cooker. This is the type of abuse that they do to renters. The banks hired someone to board up a building and the family was still living in it. Once APNC got the reputation of helping renters, then everyone was calling us. We heard from other organizations.

There are state and federal protections that include the right to stay for 90 days and if you have a lease it had to be honored. However, these protections do not prevent banks from evicting tenants and displacing families.

Q: So what did renters, advocates and volunteers do as a group?

It started in 2011 with Demian Kogan of APNC calling other organizations and asking: ‘Would you be interested in joining a coalition?’ He said, ‘Let’s start talking about what we’re hearing and brainstorm on how we can get an ordinance passed.’ That’s when we approached the Lawyers’ Committee for Better Housing and Business and Professional People for the Public Interest.

We started talking to the attorneys. These were our ideas: How can we keep families in their homes? People were so passionate about putting together a sound ordinance. We looked for a chief sponsor, an alderman who had some power, who could convince people that it was a sound ordinance.

Q: How many renters were affected by foreclosures and evictions from 2009 to this year?

I can tell you in the past two years, more than 50,000 rental units (in Chicago) were impacted by foreclosure. Many of the units we encountered were occupied by families. When you’re displacing families, you’re pulling kids out of school in the middle of the  year. You’re pulling people away from their jobs.

Q: Where were the renters?

All across the city. In the Logan Square Neighborhood. The Chicago Coalition for the Homeless was hearing that a lot of these people were becoming homeless. The unions were hearing about this.

We do know this: When we doorknocked, 99 percent of the renters had no idea of their rights. If you get a notice that you have to be out in 48 hours, you would think: ‘I have to get out, or I might be arrested.’ So, you just leave.

But federal law says if you don’t have a lease, you have 90 days to stay in the apartment after the bank gives you a notice that they’re the new owners. Federal law also says that if you have a lease, the bank has to honor the lease as long as that lease is in effect.

Q: What else did you learn?

Aldermen saw increases in vacancies in their wards. They saw the increase in crime and gang activity. The banks, in general, refused to work with us. They refused to negotiate with the tenants. When you have so many vacant buildings in your community, the price of adjacent buildings plummet. No one wants to come to the community. It leads to the destabilization of entire communities.

And we, as taxpayers, bailed the banks out. The banks didn’t want to be landlords. That’s what they told us over and over. I had a vacant building on my block. It was vacant for over two years. It was stripped inside for all of its copper. Thieves and gangs took over. There was gang graffiti all over the building.

None of us could understand the reasoning of the banks that they would want displaced families, as compared to good paying renter, who would take care of their buildings.

Q: How did momentum increase for the ordinance in the City Council?

Every alderman knew how the vacant properties were destroying their wards. They all heard these stories. The ordinance was introduced in 2012. The Coalition originally had about 16 aldermen supporting it.

The Coalition wanted to keep the issue alive in the public’s eye. We did several actions. We did press conferences. When we let the sheriff know that his name was being used in eviction notices, he was furious. The sheriff went on record saying it was an illegal notice.

About a month ago, the Lawyers’ Committee for Better Housing released a crime study and connected it to vacant buildings. The report says seven crimes happen day in relation to vacant buildings and vacant lots. That was overwhelming. We got a lot of coverage.

Recently, the head of the firefighters’ union stood up with us. His firemen went into these properties when they were on fire or something was going on inside. He said we need to pass this ordinance.

Q: What are some important elements of the ordinance?

The banks can evict the renters but not without paying the $10,600 relocation fee. Of course, our hope is that this relocation fee is never paid and that families can remain in their homes. The families can stay in that apartment until the building is sold to a third party. Once that happens, the ordinance wouldn’t apply. This will stop the eviction notices. A family could prepare to leave if they want. And the rent, if the family stays, will not increase more than 2 percent per year.

The ordinance we worked on has an easy-to-understand notice that the bank would have to give to tenants. We’re having it written in Chinese, Polish and Spanish.

Q: When did you know that this ordinance was going to pass?

We’re just a grassroots organization. We didn’t how to write laws. But to get two groups interested to write a law for us, that was the beginning. It wasn’t easy. It was a constant applying of pressure, of doing actions and meeting with city government people.

Q: Talk about the City Council vote on June 5.

We needed 26 votes to pass the ordinance. Once we knew we had 26 votes, we were like jump up and down in City Council. Only four people opposed the ordinance. One alderman abstained. There was applause. There were hugs, shaking of hands. The key aldermen who pushed hard came and just gave real heartfelt speeches on what a great job the coalition did.

Banks are very powerful. They contribute a lot of money to political campaigns. The banks put tremendous pressure on the alderman to change their vote.

This was such a huge victory for the little guy.

Our main focus at the beginning was to stop the displacement of families. When we changed our focus to the prevent of vacant properties, every alderman was concerned about that. You’ve heard about the gang-related stuff. Not that we lost focus of families, but in order to get aldermen interested, we had to change our focus.

Q: What did you learn the most?

That you have to persevere. You can’t get discouraged. When you believe, with a lot of passion, it will result in a victory eventually. When you take those three steps back, push harder the next time.