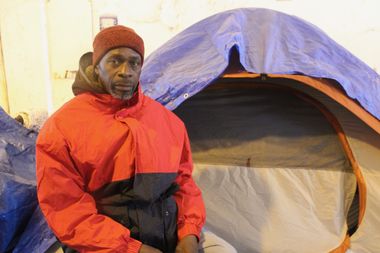 Bobby Williams in front of his tent underneath the Wilson viaduct.

Last September, Bobby Williams grabbed all the possessions he could, packed them into a grocery cart and trekked from a tent encampment near the Stewart School building to the Wilson Avenue viaduct.

Residents of the encampment were warned about the eviction on a Friday, but few of them had developed much of a plan by the time city workers erected a fence around the outskirts of the shuttered school building at 4525 N. Kenmore Ave. the following Monday morning.

“I left a lot of stuff back there…. I didn’t want to make two or three trips because I got bad legs,” Williams said. “[I left] a lot of personal things. I had to because they only gave us a certain amount of time to get out of there. And they were going to close it up.”

The ouster sent more than a dozen people living near the shuttered school scrambling for a temporary roof as winter approached. Now, those who made the move last year are finding themselves in a similar situation.

Williams has made the Wilson viaduct his home, but fears he and the other residents will soon be pushed out yet again. In June, the City of Chicago began soliciting bids, which are due July 6, for the rehabilitation of the Wilson Avenue and Lawrence Avenue viaducts.

On Wednesday, residents from the viaducts set up tents outside of Mayor Rahm Emanuel’s office at City Hall, 121 N. LaSalle St., and held a press conference asking Emanuel and DFSS to help them find actual housing before the viaduct overhaul begins.

Included in the plans for the project are six-foot wide bike lanes, which reduce the width of the sidewalks, and security fences, according to the Sun-Times.

The city is planning to “capitalize on this opportunity,” said Jones.

“We believe all people should have better housing than the viaduct, but when we have no other options available we have no choice,” Jones said. “A space where you feel safe, where you have access [to] food [and] healthcare, that makes a big difference between life and death especially when you’re out there. We need the city to understand they are causing displacement of a lot of people like myself.”

Construction is expected to start in August or September. Once construction begins it should take 6 to 8 months to complete, said Chicago Department of Transportation spokeswoman Susan Hofer.

DFSS has been in communication with the viaduct residents about the project and once details are finalized, “the City will provide the community with a 30 day notice of the construction timeline,” the department said in a statement.

“The Homeless Outreach and Prevention team will also work with those affected to ensure they are safe and know all of their options for services. This will include working with partner agencies to provide resources for food, shelter and other needs,” the statement said.