UPTOWN — The relationship is rocky between Ald. James Cappleman (46th) and some advocates for poor Uptown residents, which doesn’t bode well for North Side activists hoping he accepts an invitation to discuss affordable housing at a public meeting this month.

In February, the Organization of the Northeast (ONE) and Lakeview Action Coalition (LAC) invited Cappleman to the March 21 meeting and asked that he confirm his attendance by Monday. The groups expect hundreds of “concerned voters” to attend.

Cappleman chief of staff Tressa Feher told DNAinfo Chicago that the alderman is “not sure” if he will be there and did not explain exactly how the decision will be made.

But last Wednesday, as more than 200 activists and residents from Uptown, Edgewater and Rogers Park marched in the street outside Cappleman’s Uptown office accusing the alderman of being “at war” with the poor, Feher showed frustration with LAC and ONE.

Both have reputations for storming the streets to make a point.

“I don’t really understand what they want from us,” Feher said, particularly peeved at LAC and their stance about the Chateau Hotel. “We work with them and we work with them — and then suddenly they start protesting us … ‘We’re not working hard enough’ — that’s what they tell us.”

Last Wednesday was also the night before a rally organized by LAC and Lakeview residents outside the Chateau Hotel, 3820-3838 North Broadway.

The building was purchased by 3838 Broadway LLC recently from Jack Gore, who failed to repair a plethora of building code violations in the SRO. The largely low-income residents there are seeking new homes after being issued eviction notices from the building, where rent will soon more than double.

In early March, Cappleman said on Twitter that LAC “is demanding that I illegally block the issuance of building permits to keep rents at current rates,” and argued that the organization was asking him to engage in “extortion.”

In another tweet, Cappleman said, “Their tactics of exploiting the most vulnerable requires me [to] work with other advocates.”

Cappleman has promised that nobody in the Chateau will end up homeless, and said Catholic Charities and the building owner are working with residents to find housing elsewhere. But the alderman is not identifying the investors who bought the building, and Cappleman is not advocating for affordable rent.

Cappleman “has nothing to do with someone buying the Chateau Hotel,” Feher said.

“That’s a private transaction that happened between the former owner and the current owner,” she said.

“We are looking forward to sitting down face to face with him and working these issues out to see what he’s willing to do to help back up his claim that he really cares about affordability and really cares about poor people,” she said.

She acknowledged that Cappleman might not show on March 21 but said that “it will look really bad if he leaves hundreds of his constituents waiting for answers.”

“I don’t know if he’s going to come or not but I think it would be a mistake for him not to,” Ryan said.

Last Thursday, tenants and LAC members at a “Save the Chateau” rally said Cappleman is on the wrong side of the Chateau issue.

Under the new ownership, apartments will rent for $800 to $900 per month, said Elizabeth Hartline, a 49-year-old tenant.

“None of these people in this building can afford that,” said Hartline.

Ryan said she understands there are limits to Cappleman’s power. But she said he can still use his influence to advocate more than he has.

Ryan cited the Diplomat Hotel, a Lakeview SRO shuttered for code violations in 2009. That building was acquired by the city in 2010 and sold for $1 in 2012 to BT-Diplomat LLC, a partnership between the private Brinshore Development LLC and the non-profit social service agency Thresholds.

BT-Diplomat LLC is giving the building a makeover and retaining affordability.

Ald. Tom Tunney (44th) was key in supporting the project, Ryan said, and the city pledged to provide more than $10 million in federal and state housing tax credits.

With SROs becoming an endangered species on the North Side, Ryan would like a city ordinance that prohibits rents from being raised when ownership of the buildings change.

Cappleman “can be a leader on this issue,” Ryan said. 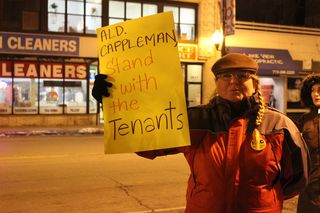