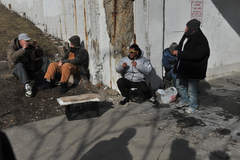 One thing I’ve noticed about homeless people over the years is that most tend to have a long memory when it comes to the kindness of strangers.

Those living under Lake Shore Drive at the Wilson Avenue viaduct, whom I introduced to you in Sunday’s column, are no exception.

Without prompting, they started listing for me all the nice things that people have done for them in their time on the streets.

There was the woman who paid to put them up for two nights in a Lincoln Avenue motel during the worst of this winter’s cold spells.

There’s the taxi driver who drops by every two weeks and gives $2 apiece to anyone living under the viaduct.

Another man comes by regularly to distribute free socks.

The Asian businessman who visited with a briefcase full of cigarettes never reappeared, but his gift of a free pack of Marlboros to everyone still stands as legend.

“Another man stops and asks: ‘What do you need?’ I say I need boots for the snow. He says: ‘OK, I will find for you,’ ” recalls Nicholas “Jose” Hernandez, proudly displaying a pair of old used work boots the man procured for him.

Even some of the local police inquire: “You need anything?”

And then there’s the food: the church lady who comes from the suburbs every Sunday with a home-cooked meal; the Chinese restaurant owner who drops off his leftovers late at night, and lots and lots of McDonald’s hamburgers, so many burgers in fact, owing to the restaurant’s nearby location, that the people under the viaduct pine for a Kentucky Fried Chicken to open in the neighborhood.

“We’ve got more food than we know what to do with,” says Tamara “Tami” Walsh, who has been on the streets for 19 months since losing her home in Channahon. She found out last week that her daughter is expecting Walsh’s fifth grandchild.

I thought Walsh was exaggerating about the food, and still do to some extent, but as if to reinforce the point, Hernandez and Ramiro Velazquez, the homeless marathon runner, picked that moment to feed the birds and squirrels.

They did so by reaching into their food stash and chucking pieces of leftover McDonald’s cheeseburgers onto the Hill — their name for the Lake Shore Drive embankment.

“Have you fed the possum yet?” Walsh asked.

Robert Zachowski, homeless for two and a half years now by his count, assured her they had fed the possum earlier in the day.

Because of their largess (owing to their visible location at the Wilson Avenue exit), the folks under the viaduct say they also share their food with other homeless people who sleep in the park around the golf course.

In the category of strange but true, the viaduct dwellers say they don’t really need food from the Salvation Army’s mobile soup kitchen, which stops just yards away every weekday.

With all the other donated food, most told me they don’t eat the free soup, although they do avail themselves of the assistance of the Salvation Army social workers who accompany the food truck and try to solve other problems for them, including the biggest one — finding housing.

Long before their local alderman (who need not be named again so as to avoid beating a dead horse) took aim at the Salvation Army truck, the people under the viaduct had started counting him as a person who was not a friend to the homeless—owing to some of his other efforts to “help” them.

Somebody might argue that all those individual acts of charity from strangers amounts to “enabling” the homeless people to live like they do. While that may be true to an extent, my personal opinion is that nobody can go wrong by clothing the poor and feeding the hungry.

In her time under the viaduct, Walsh said she has met a homeless doctor and a homeless lawyer and homeless schoolteachers.

“There have been very many educated people that lived on this hill and under this viaduct,” she said.

Homeless people were living under the viaduct before Walsh arrived, and she expects homeless people will be there after she is gone. She’s been accepted into a program that will help her get an apartment.

Homeless people “will always be here because this is where they can get stuff. This is where people will help you. The alderman ain’t going to be able to change that,” she said.