The Speakers Bureau partnered this fall with students at four Chicago area colleges and universities to advocate on behalf of people who are homeless.

Unlike the typical day in class, students at Columbia’s Writing and Rhetoric class staged a petition drive to protect state funding for homeless programs in Illinois. Class on that Monday afternoon was certainly different. I walked into the lobby of the 623 S. Wabash building to find students armed with clipboards and pens, scouting potential signatures. Heading out in small groups, students took to the streets to appeal to a larger audience. The more signatures, the better. By the end of the day, students had successfully collected over 1,000 signatures.
– Kristine Kulp, freshman 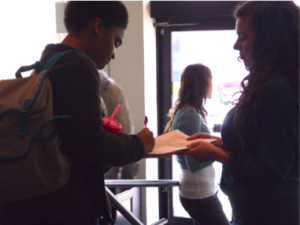 Initially I was not up to it. I mean going around asking people to sign, when most people would probably say no. After awhile of getting my feet warmed up, I started to get into it, especially when some of the people were getting excited and eager to sign the petition. They were glad to help. My classmates and I were walking the streets, informing and asking people to sign.

I turned the corner and it was my chance to ask a guy to my left to sign. I approached him and asked, “Would you like to sign this petition to help fund homeless shelters in Chicago?” We began to have a conversation in more detail of what this was all about. The words that were stuck in my mind from that guy were, “You’re doing something really cool, keep up the good work.” After he said that I began to realize that I was making a difference, and helping homeless people regardless of how many signatures I got. I was spreading the word about funds being cut and homeless people who need shelter.

My classmates and I continued to walk down the street, not letting one single person get past us without making an attempt to ask them for their signature. We talked amongst one another and I asked another student, Brandon, “How does it feel to know your are helping thousands of people by helping with this petition drive?” He chuckled and said, “It feels good, man, I mean if I was ever in a predicament such as needing shelter, I would hope that someone would be this nice and do things like have a petition drive.” 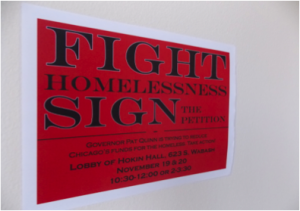 After an hour and a half of giving speeches and getting signatures, it turned out to be a success. From all the classes we got over 1,000 signatures.
– Jasmin Brown, freshman