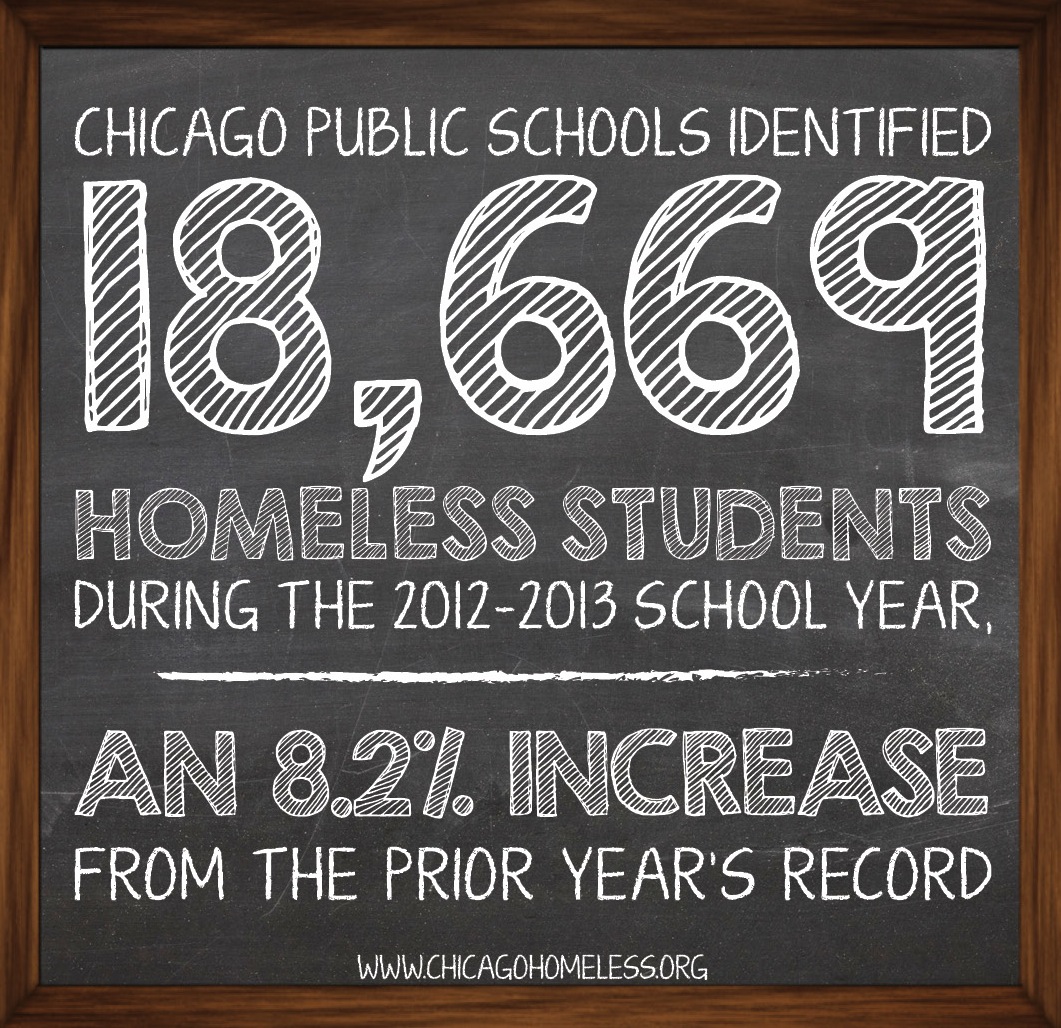 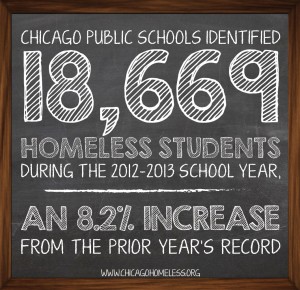 Chicago Public Schools served 18,669 homeless students during the 2012-13 school year that ended this June, another year-end record for the city’s public schools.

Meanwhile, the Illinois State Board of Education (ISBE) released data showing that public school districts statewide identified 51,638 homeless students. This also was an increase of 8% from the 47,816 students identified in the 2011-12 school year. ISBE collects data on June 15, so year-end tallies can vary slightly from official counts taken by school districts on June 30.

Students whose families live “doubled-up” with others to avoid living on the street are among those considered homeless, per U.S. Department of Education guidelines.

In Chicago, 90% of the homeless students identified in 2012-13 (or 16,805 students) lived doubled-up in the homes of others. Other living situations included 8.9% (1,668) who lived in shelters or motels. Less than 1% of students lived in other homeless situations, such as living in their car or other public place (83 students) or in temporary foster care (108).

The demographics of Chicago’s homeless students are African-American, 84.3%; Latino, 11.7%; white, 1.7%; other ethnicities, 2.3%. Almost 20% of the students are diagnosed with a disability. Attendance rates were 88% to 89% for students through 8th grade, and 76% for high school students.

CPS also tracked 2,512 students who were unaccompanied youth, living homeless without parent or guardian. They comprised 13.4% of the homeless enrollment. Meanwhile, their numbers dropped by 16% from the prior school year, when 3,005 unaccompanied youth were identified.

At least two-thirds of the clients served by the CCH Law Project are homeless children and teens with school access issues or denied school services in Chicago and the suburbs. During FY 2013, CCH assisted 210 students. These children and teens comprised 73% of CCH’s legal aid caseload.

“Year after year we’re seeing record enrollment of homeless students in Chicago’s public schools,” said Associate Legal Director Patricia Nix-Hodes. “It shows the vital importance of maintaining school stability when so many children and teens are already coping with unstable housing situations outside of school.”

Homeless students and their families who live anywhere in Illinois are able to phone the Law Project on its toll-free number if they need legal assistance or referral to a local legal aid provider. The toll-free number is 1 (800) 940-1119.