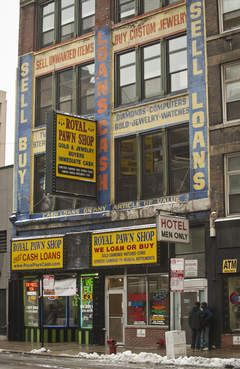 The hotels – The Ewing Annex, 422-426 S. Clark Street, and the Wilson Club Men’s Hotel, 1224 W. Wilson – are home to 325 low-income men, including students, veterans, day laborers, the disabled and the under-employed.

The aldermen called the hotels “unfit for a dog,” despite never having set foot in either. Yet both buildings, inspected regularly, were in compliance with city building and fire codes, with rooms enough to house 450 men.

Residents of the Ewing decided to fight for the roof over their heads. They joined forces with CCH organizers to push back to save their homes.

It was through this partnership that Senior Community Organizer Wayne Richard spent several weeks with residents of the Ewing. He met remarkable men and produced this video about them and their home.

As the men share their stories, it becomes evident that tough times and lean living has turned them into determined, self-sufficient and yet compassionate people.

Furthermore, through organizing, legal pressure, and media coverage – including stand-out columns by the Sun-Times’ Mark Brown – we succeeded in pushing city officials to shelve the Cappleman/Reilly ordinance.

CCH shares this victory with the men of the Ewing and several ally organizations, including the Sargent Shriver National Center on Poverty Law, Lakeview Action Coalition, and StreetWise Chicago.