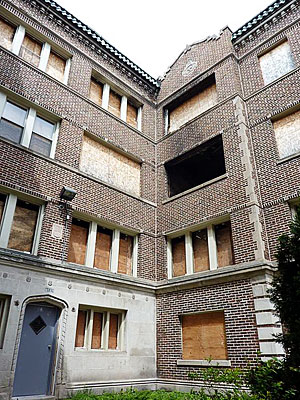 Vacant foreclosed properties dot the map of Chicago and its surrounding suburbs. So think of the new Cook County land bank as housing’s Georges Seurat; it’s trying to arrange all those individual dots into something new and better (much as the pointillist painter did with A Sunday on La Grand Jatte).

According to Cook County Board President Toni Preckwinkle, the land bank will attack the vacant property issue on a regional level, not one empty home at a time. That’s in part because of the enormous size of the problem. “What’s really troubling is that 10 percent of housing units in Cook County are vacant, and 85,000 [more] foreclosure cases are pending in circuit court,” Preckwinkle said February 7 at a Metropolitan Planning Council event.

The land bank will help clean up the snarled title on some vacant properties so they can transfer more expeditiously to new owners. It will also work at getting the land off of tax rolls so developers won’t have to worry about carrying costs as they assemble enough parcels to make a project happen.

Scott Goldstein, an urban planner who was part of the county’s research team, characterized the land bank as “a  technical tool to make development happen.” Preckwinkle described it as using the crisis as a way to address “longstanding economic stagnation that has built up over the years” in deeply impacted neighborhoods and suburbs.

County officials are asking Attorney General Lisa Madigan for $20 million of the $70 million she is offering for community foreclosure aid out of the March 2012 national foreclosure settlement. Those funds would be used mainly to acquire vacant property.

Later in the day, during a conference call with the Woodstock Institute, Gainer emphasized that lenders won’t be able to dump properties on the land bank. Donated properties will need to meet certain strategic needs of the land bank, and lenders will have to provide funds to cover various expenses, she said. “A check will come with [the properties],” Gainer said.

In the short term, the county and individual communities may develop a stock of rental housing in some of the acquired properties, the officials said. Other intermediate uses—such as using empty land for urban agriculture or allowing local groups to use vacant buildings—might also be possible. That will turn the properties into community assets instead of albatrosses, Gainer said, while allowing for a managed flow of the properties onto the for-sale market.

“We take some supply off the market right now,” Gainer said during the Woodstock call. “There are neighborhoods with 300 vacant homes, and there [isn’t] that kind of demand. If every one goes on the market at the same time, it hurts purchase prices, but also, they won’t move. They’ll be vacant longer.”

In the long term, the land bank will be charged with moving its holdings into the ownership of tax-paying entities, although officials have not yet said how many properties might be retained permanently, in, for instance, a rental program.

The land bank rolled forward last Friday when Preckwinkle named a board of directors, which included Gainer, to the new authority that will govern the land bank. If that sounds like just another layer of bureaucracy, don’t worry: it’s meant to be exactly the opposite. The goal, as Preckwinkle said earlier, is to speed the transfer of vacant properties to productive, tax-paying use by getting obstacles out of the way.

“It will have clarity of purpose,” Gainer said. “It’s an entity whose whole focus is, What are we doing about vacant properties in Cook County?”