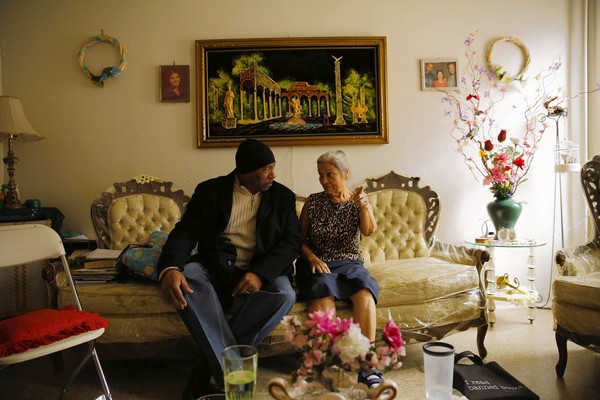 Jonathan Fine was walking through the old housing project looking for the right words.

Whatever the right words are, they’re not ones typically associated with Chicago public housing. But then, the Lathrop Homes aren’t typical.

“This is the best public housing complex Chicago has ever had,” Fine said. “It doesn’t need to be erased and replaced.”

It was Friday morning and as Fine walked along the curving walkways, past the empty low brick buildings, nothing moved but a few geese nibbling at the winter grass. The only sound was the hum of traffic at the intersection where Diversey Parkway meets Damen and Clybourn avenues.

In his view, nothing.

Fine is an architect, and last week, Preservation Chicago, the group he runs, issued its annual “Chicago 7” report, a list of the city’s most endangered architecturally valuable buildings.

On the list were a bank, a church, a former hotel and, less predictably, this public housing complex that sits on 31 acres of coveted property next to the Chicago River.

“Would you believe you’re in the middle of the city?” he said. “It’s beautiful. Soothing.”

The Julia C. Lathrop Homes were built in 1938, during the Great Depression. The development resembled a college campus, with trees and wide lawns, whimsical finials at the rooftops and brick arches that gave way to courtyards. Among its prominent designers was Jens Jensen, the landscape architect who also designed Lincoln Park.

“Notice the quality of the workmanship,” Fine said, pointing to the impeccably laid brick. “These buildings were meant to last for the ages.”

But in Chicago, this is the age of the tear-down.

For a decade, as Chicago demolished its public housing high-rises, Lathrop’s fate has been uncertain. Will it all be razed? Some of it? Will housing remain for the poor and working class?

The public hearings on its redevelopment have frustrated many preservationists, as well as the remaining residents and some people in the nearby prosperous neighborhoods who worry about congestion from new high-rises and big-box retail.

About the time he said that, a security car rolled up the walkway. The guards told us we couldn’t be on CHA property without permission.

We gave them our business cards, then crossed the street to the portion of Lathrop where people still live, and there we met Titus Kerby. We walked with him a few yards, to a courtyard filled with old trees.

“You have 31 acres of great design,” Fine said, “but what also makes Lathrop great is that it’s a community.”

“It’s a diverse community,” said Kerby, who transferred to this section of Lathrop when the rest was emptied.

About the time he said that, the security car rolled up again.

After they threatened to call police, we went to visit Aida Maisonet.

Maisonet is 76 and lives in a spotless apartment with plastic flowers in the window and a plastic sheet on her gold sofa. She welcomed us in to inspect the interior features of the Lathrop Homes.

“The buildings are made of concrete,” Fine said. He knocked on a wall to show how sturdy it was. He tugged on the stairway railing to show how solid.

The kitchen and two bedrooms were small by modern standards, but pleasant. The floors were level.

Fine is not a public housing advocate. His group didn’t recommend saving other housing projects. But he does see a connection between preserving these buildings and preserving a community for people short on clout and cash.

His Friday visit gave him another glimpse of how difficult it can be for Lathrop residents to advocate for themselves.

“If I, as an upper-middle-class white male who owns my own home, was threatened with arrest for daring to step on the property to have a conversation with a resident,” he said, “I can’t even begin to imagine the oppression the residents of CHA have to live under every day of their lives.”