When Ashley Allen turned 8-years-old, her father was sent to prison, and soon after that, the girl and her mother and younger brother and sister found themselves homeless, living in shelters.

“It was really difficult to live in that situation,” said Allen, now 30. “As I went through my homeless journey, the emotional thing was probably the greatest negative thing.”

Allen was a guest speaker during the Student Alliance for Homeless Youth’s Nov. 11 candlelight vigil at the Hubbard Woods Park Pavilion in Winnetka, which attracted about 100 people.

The alliance, run by high school students, held the vigil during National Hunger and Homelessness Awareness Week to spread awareness of the pervasive issue of homelessness among youth and its profound impact on those children, said Natalie Mogentale, a New Trier High School senior who joined the organization three years ago.

“It’s an appropriate time to spread awareness about the issue,” said Mogentale. “I feel like in our area especially, we’re not exposed to homelessness a lot so it’s a good thing to inform the people in our area of the issue.”

She also said the alliance is about much more than just spreading awareness. The student alliance was founded on the belief that that all children have a right to shelter, food, education and freedom from abuse and exploitation, she said. To that end, students from New Trier High School, North Shore Country Day School, Loyola Academy and Maine South High School, work together to serve homeless youth in the greater Chicago Metropolitan area, said Mogentale.

She said that in addition to the annual candlelight vigil, members hold an annual paddle tournament to raise funds for a college scholarship program sponsored by the Chicago Coalition for Homeless, hold community outreach parties at the Morton School for Excellence at 431 N. Troy Street in Chicago and at the Madonna House homeless shelter for women and children in Chicago, Ill., as-well-as providing school supplies for shelter children, and supplies for teens living on the streets.

Mogentale balked at the suggestion that affluent residents of Winnetka may not be concerned about homelessness in other parts of the state.

“In the past the vigil has been a great way to spread awareness to people that didn’t really connect to the issue because they’ve never really experience it or seen it,” she said. “That’s what inspired me, hearing people who actually lived through it and now they’re doing good for everyone else.”

There are about 25,000 homeless youths in Illinois ranging in ages from 13 to 24, and that that number does not include children under the age of 13, said Megan Wickman of Teen Living Programs, a Chicago-based social services agency for homeless youth. She also said that nearly 9,000 of those young people are in the Chicago area, and that in Chicago alone, there are 1,850 homeless youths on the street on any given night vying for about 300 beds in various shelters.

“Conservatively, this represents an 85 percent gap between the number of youths who are homeless in Chicago on any given night and the number of beds available to serve them,” Wickman said.

Antwon Mallory is the YMCA resource coordinator at the Morton School of Excellence, and he said that students from kindergarten through grade eight are grateful for the student alliance’s help.

“They are our friends and partners,” he said. “That’s the greatest thing in the world, to have that passion inside of you and the motivation to want to actually make a difference and give of yourself to others.”

Allen said it was help from others that allowed her to graduate from college, and she said she now works with the homeless in Chicago. She said that even during the toughest times, she always focused on getting a good education.

“At the end, my education was something nobody could evict me from,” she said. “Nobody could steal it. Nobody could take it, and it would open up a world of opportunities and possibilities for me.” 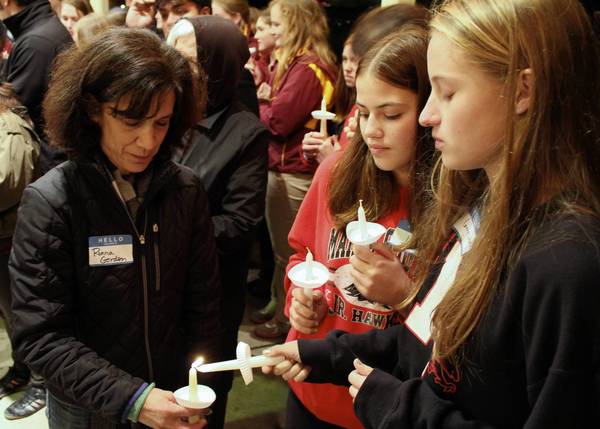