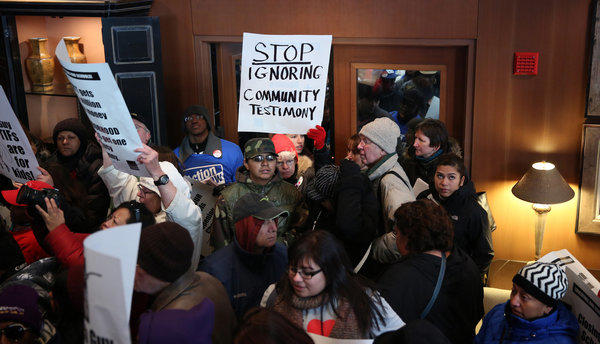 Organized by the Chicago Teachers Union and Stand Up Chicago, a coalition of labor unions and community groups, marchers walked from Cityfront Plaza on East Illinois Street to the Hyatt Hotel at 633 N. St. Clair Street, banging drums, blowing whistles and then crowding into the lobby of the hotel where they called on Chicago Board of Education member Penny Pritzker to give back $5.5 million in TIF funding.

The CTU and school closing opponents allege that Pritzker, who sits on the board of the Hyatt Hotels Corp., has taken TIF development funds for  a new hotel in Hyde Park.

A spokeswoman for Hyatt said in an email the protesters have their facts wrong. The company has not received any money from the city for the construction of the Hyde Park Hotel, which is being developed by outside companies under a franchise agreement with a Hyatt affiliate, the spokeswoman said.

The developer received $5.2 million in TIF funds, the spokeswoman said.

CTU members taped a sign similar to a past due library bill to a pillar outside the Hyatt, demanding Pritzker return the money to CPS.