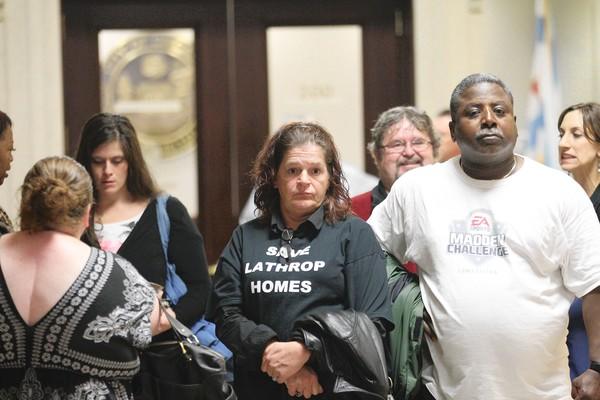 As the Chicago Housing Authority prepares to unveil an updated version of its 12-year-old effort to remake public housing, tenants and housing advocates say they are increasingly frustrated by a lack of progress in getting tenants into homes.

About two dozen CHA residents and community organizers on Wednesday expressed their aggravation inside City Hall, chanting “Lease it up!” in a call for the agency to move tenants into some of the nearly 3,500 empty public housing units slated for renovation that have sat untouched for years.

“While these apartments go unoccupied, the CHA still gets funding from (the federal government),” said Princella Lee, 38, an organizer with the Kenwood Oakland Community Organization on the South Side. “This is wrong and it must end.”

Launched in 2000, the CHA’s $1.6 billion Plan for Transformation has hit several snags in recent years. Since the economy wilted, private developers have held off on plans to complete the mixed-income developments that were intended to anchor neighborhoods where high-rise public housing towers once stood.

That has hampered the CHA’s efforts to follow through on renovation plans for other developments. Originally a 10-year effort, the plan’s current deadline for completion is 2015.

The agency has entered into agreements with owners of private multifamily buildings citywide to set aside apartments that public housing tenants could rent with federal vouchers tied to those specific developments.

“We are moving quickly to ensure unoccupied, offline public housing units are back online and leased as quickly as possible,” CHA spokeswoman Wendy Parks said in an emailed statement.

She added that 607 more apartments will be rehabilitated by 2014 and that many of the other empty apartments are “offline” and uninhabitable.

Housing advocates are pushing for more urgency, noting that several thousand more CHA families have been waiting for years to return to their old neighborhoods.

CHA officials have resisted calls to maintain those developments exclusively as public housing, arguing it would be a return to warehousing the poor in islands of poverty. The agency said it is working on a new plan for those developments and for the Altgeld Gardens development on the Far South Side, indicating that private homes will be part of the mix.

Tenant advocates argue that the Cabrini and Lathrop developments are near grocery stores, restaurants and other amenities, making rehabilitated public housing there a solid strategy that could be carried out quickly.

Robert Whitfield, a private attorney who represents the Central Advisory Council elected tenant board, argued that the agency is banking too much on the still-unpredictable housing market.

“Everybody knows that the mixed-finance model is heavily dependent, if not totally, on the for-sale market,” Whitfield said. “If that doesn’t turn around, they’re not going to start construction, which means that the people from Cabrini and Lathrop will continue to wait and wait. Our question is, how long are they supposed to wait?”