Stand Up! Chicago partners released this open letter to Mayor Emanuel on October 3.

We are writing to express growing concern among Chicagoans about recent changes to the City budget process that, taken together, represent a complete break with past precedent and serve to virtually eliminate public participation in the process. The City of Chicago has a long history of engaging with communities as part of the budgeting process; however, your refusal to release any specific information regarding the budget, potential cuts and to hold town hall meetings prior to your October 10 city budget address are a troubling development, and demonstrate your administration’s lack of transparency with respect to our communities.

At a time when Chicago is experiencing record unemployment, record foreclosures, record poverty, and continuing school closures, the City must ensure that the budget does not further burden Chicago’s working families. Budgets are moral documents – they lay out a city’s values and priorities. Our members have credible solutions to offer – progressive revenue solutions that need to be heard. It is negligent to leave those who are most impacted by spending cuts—our neighborhoods and communities—out of the budget process. Community groups and concerned citizens should be given ample time to review the proposed budget and to engage with their Aldermen and your office prior to the city budget meeting as part of the democratic process. Further, we are deeply concerned about your administration’s lack of transparency with respect to our City’s budget process.

As a recent article in the Chicago Tribune noted, you have indicated that you will not increase taxes, fines and fees, and will include a number of unspecified cuts to essential programs and services, in next year’s budget. It is highly unusual that at this point in the process—less than two weeks before the October 10 budget meeting—we do not have a preliminary budget to review, especially considering the impending cuts that may impact the programs and services which Chicago’s most vulnerable depend on.

As members and leaders of Chicago community, labor and faith organizations, we the undersigned are joining together to request that the City honor past precedent and provide for transparency and community participation in the budget process. We demand that you release a proposed budget immediately and schedule public town hall meetings to ensure that our communities are included in all steps of this process. 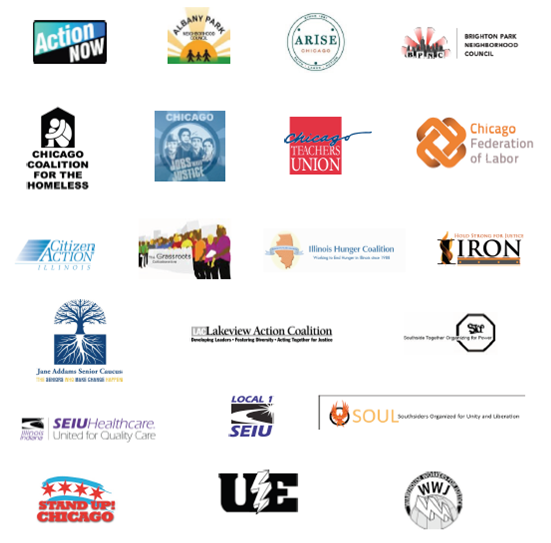