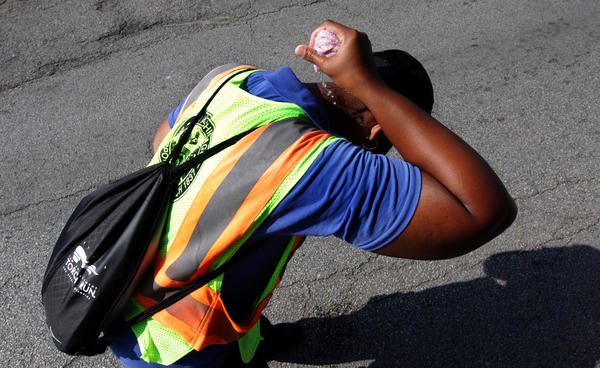 Staying cool is tough for almost anyone on a blistering hot day, but it can be especially difficult for Chicago’s homeless population, according to shelter officials, who have seen a huge influx of people trying to beat the heat at area shelters.

The Pacific Garden Mission on Canal Street in Chicago is severing more people this summer than average, about 750 per evening, compared to about 600 per evening most summer nights, said Pastor Phil Kwiatkowski, vice president of ministries at the mission.

The facility also saw about 200 people in their day room area on Thursday trying to stay cool. That is about double the usual amount on a more seasonable day.
“I don’t remember it staying this hot for so long,” said Kwiatkowski. “People are coming in the shelter shaking their heads. It’s tough on them.”

Cathy Curran, executive director of PADS Lake County, said it recently had to take several individuals who came to their North Chicago shelter to the hospital for dehydration.

“One of the problems is some individuals continue to wear winter clothing such as a coat,” said Curran. “Some have mental illness issues and don’t want to take it off. It can be difficult to help them.”

Curran said the PADS day shelter is averaging about 50 people compared to about 15 people on nice weather days. The night shelter is full with about 30 people.

She said shelter officials are also encouraging people to drink a lot of fluids along with influencing them to stay inside a cool place.

Ed Shurna, director of the Chicago Coalition for the Homeless, said it’s harder for homeless people to deal with the heat.

“Most homeless people don’t have shorts and T-shirts to wear,” said Shurna. “They’ll lug around all their belongings and in many cases won’t take off their winter clothing.”

Shurna said shelter officials always take seriously the impact cold weather has on the homeless, but he added that this heat wave in particular also has caught their attention.

“We’ve never really had 100-degree temperatures for such an extended time,” said Shurna. “This is pretty new for us. Cold can kill people, but if you’re in an abandoned building in this weather, you could also die of heat stroke, for example.”

Bob Adams, clinical director of the Midwest Shelter for Homeless Veterans in west suburban Wheaton, said a 31-year-old Iraq war veteran living in a nearby forest preserve came to the shelter recently in part to escape the hot weather.

“The hot weather was a factor for him,” said Adams. “It’s not easy living outdoors; it took a toll on him.”