Chicago Coalition for the Homeless (CCH) opposes the proposed closure of all four neighborhood high schools in Englewood due to the disproportionate impact this would have on homeless, low-income and black students. 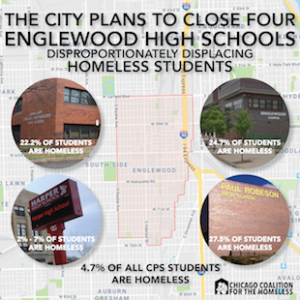 CPS has announced that students attending the four schools will not be offered an opportunity enroll at a newly-built Englewood school planned to open in fall 2019. Instead, they must transfer next year to designated schools in other South Side neighborhoods.

“It is unfair to target these schools for closure, all in one neighborhood, because of the disproportionate impact on vulnerable students,” said CCH Law Project Director Patricia Nix-Hodes.

Homeless students have higher rates of school mobility, causing them to face many barriers to enrollment, attendance and success. Research shows that students who move schools deal with learning delays, missed school days, and disruptions in peer networks and personal relationships.

The CPS method for redrawing attendance boundaries of schools proposed for closure exacerbates the safety and stability for homeless students served by the Students in Temporary Living Situations (STLS). Students are unlikely to remain with many of their classmates since attendance boundaries will be split among several different schools, and students must travel far distances to other neighborhoods.

Draft transition plans issued by CPS fail to provide adequate support for transitioning STLS students into new schools. CPS did not reserve designated slots at higher-performing schools for homeless and other students impacted by the proposed closures. The Chicago Consortium on School Research issued a 2015 report on CPS school closures that found only students who attend substantially higher-performing schools after their school closes have better academic outcomes.

To ensure that homeless students are not harmed academically by a forced change of school, CPS should guarantee that displaced students can choose a substantially higher-performing school. This includes setting aside slots at magnet and selective enrollment schools and extending the current December application deadlines to those schools.

Given the high numbers of homeless students at the schools proposed for closure, CPS should also appoint additional staff at each school to assist STLS students successfully transition to each school.

Due to the adverse effects of school mobility on homeless students and the high numbers of homeless students at the Englewood high schools, Chicago Coalition for the Homeless urges the Chicago Board of Education to vote against these school closings.

The Law Project and its Youth Futures mobile legal clinic closed 548 cases in 2017, 91% of cases filed on behalf of homeless students and unaccompanied youth.