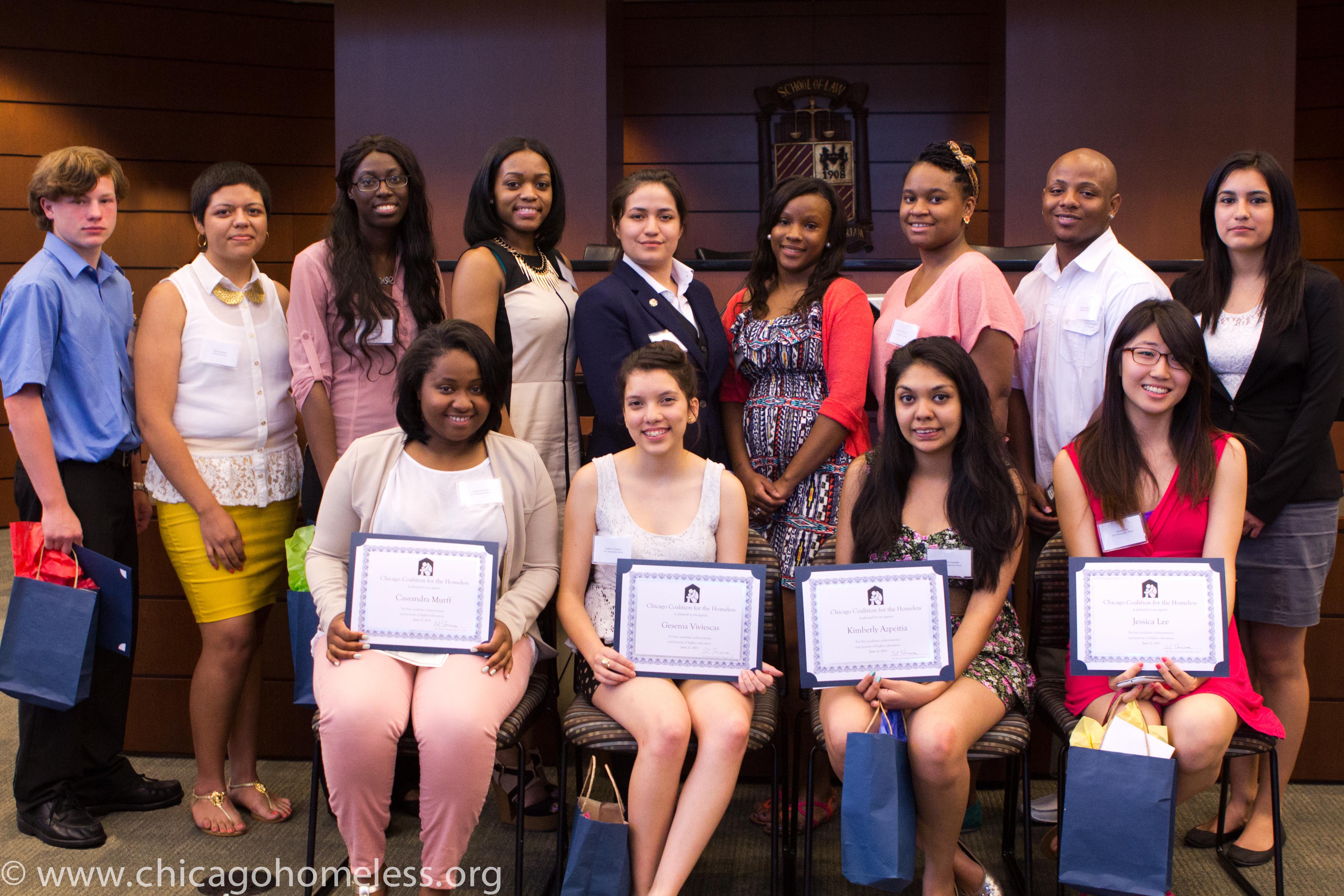 CCH college scholarship applications for 2014, including two references, must be submitted online or received in the mail by 4:30 p.m. on Thursday, May 1.

Up to five students who have experienced homelessness will be awarded $2,000 annual scholarships in June. The scholarships are renewable as students pursue their bachelor’s degree.

In the program’s 10 years, 39 students have won more than $150,000 in scholarship aid funded by private donors and several grant makers. During this 2013-14 school year, 16 students received awards, including six freshmen who were among 38 applicants last spring.

Eligible to apply are graduating high school seniors who were homeless at some point while attending Chicago Public high schools. Also eligible are former youth clients of the CCH Law Project who live in the city or suburbs, or youth leaders active at CCH who have a diploma or GED and are no older than age 22.

Each summer, the Chicago Coalition for the Homeless awards $2,000 renewable college scholarships to graduating seniors who experienced homelessness while in high school.

Eligible to apply are students who were homeless at some point while attending Chicago Public high schools, a former youth client of the CCH Law Project in the city or suburbs, or a youth leader who is active with CCH and no older than age 22. Applications for 2014 are due May 1. More detailed eligibility criteria can be found here.

In 2013, six finalists were chosen from 38 applicants. Our 15 new and returning scholarship recipients were honored June 27, in a ceremony hosted by Loyola University Law School.

To showcase the promise and tenacity of aspiring college students who lived with homelessness while in high school, the CCH Law Project created the scholarship program in 2004. The program was the next step for a legal aid program that focuses its casework on helping homeless children and youth access public school. Patricia Rivera, then the director of the Chicago Public Schools’ Homeless Education Program, collaborated with CCH in creating the scholarship, and was the first of the private donors to fund the scholarships.

In 10 years, through 2013, 39 homeless or recently homeless students have received renewable scholarships totaling more than $165,000. Fifty-six percent of our students have earned their degrees or are progressing through college. Six scholarship recipients have graduated with bachelor’s degrees. A seventh graduated from a nursing program. Fourteen scholarship recipients will start or return to college in 2013-14, attending schools in Illinois and Arkansas. The program also assists one student pursuing a post-graduate degree.

CCH donates its staff time and the costs of the summer event at which the students and donors meet to present the new scholarship winners.