Helped by a scholarship from the Chicago Coalition for the Homeless, this fall Alexandria Bolling starts her freshman year at Howard University, her dream school. Alex is studying to become a teacher, another dream she has held for as long as she can remember.

But her journey has not been easy.

Originally from southeast Louisiana, Alex’s parents split when she was four, leaving her mother to raise Alex, her twin sister, and two brothers on her own. Soon after, Hurricane Katrina destroyed the family’s apartment and most of their belongings. They bounced around relatives’ homes until her mother could get them back on their feet.

“My mom was always socially conscious and demanded the best of ourselves,” Alex recalled. “She taught us to have a voice of our own.” But Alex was shy, more observant: “I liked to hear what other people had to say.”

When she was 14, Alex made the difficult choice to leave home, moving north to Evanston for better educational opportunities. Money was tight – she stayed with an aunt and seven younger cousins – but the change in academic environment proved beneficial. 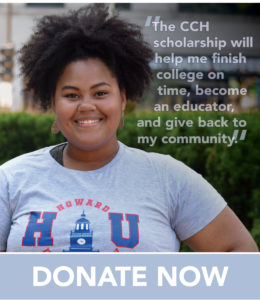 It was at her new school that Alex began to speak up, and her passion for social justice was ignited. Class discussions around social issues were encouraged: “I learned what it means to fight for what’s right.” She joined the Debate Team, serving as captain her senior year.

“Debate opened my world to who I could be when advocating for others,” Alex said. She competed around the country, championing mock legislation to support youth programs. She spearheaded a group for classmates of color to share their experiences. She participated in a school walkout against gun violence.

But the summer before her junior year, financial challenges caused her aunt to be evicted from their Evanston home. Alex was forced to double-up with relatives on the far South Side of Chicago. Her commute to school topped three hours round trip, involving two buses and a train. This took away valuable study time and made getting to school on time challenging. She lost friends and her grades suffered.

“Homelessness broke my confidence,” Alex said. “It took a toll on me emotionally. I struggled to keep up a level of scholarship that I felt I was capable of.”

Despite these challenges, Alex persevered. She continued to make the honor roll. She participated in Evanston Scholars, a college readiness program. She worked as a counselor for a camp serving homeless children. And after years of struggle, she is proud to be attending an historically black university, like her mother did.

“Homelessness doesn’t have to keep you from succeeding,” she said. But support is crucial.

Alex credits her mother and her Evanston Scholars mentor for their guidance, as well as a teacher that showed empathy for her situation. “When I came to class really late, instead of scolding me, she got me caught up right away,” said Alex. “She prioritized my success and education over my tardiness.”

As a future educator, Alex seeks to do the same.

“There’s more to education than the textbooks and history lessons,” she said. “It’s a community inside a classroom.”

And her wish for her future students? “I want them to find happiness and peace, no matter what they’re going through.”