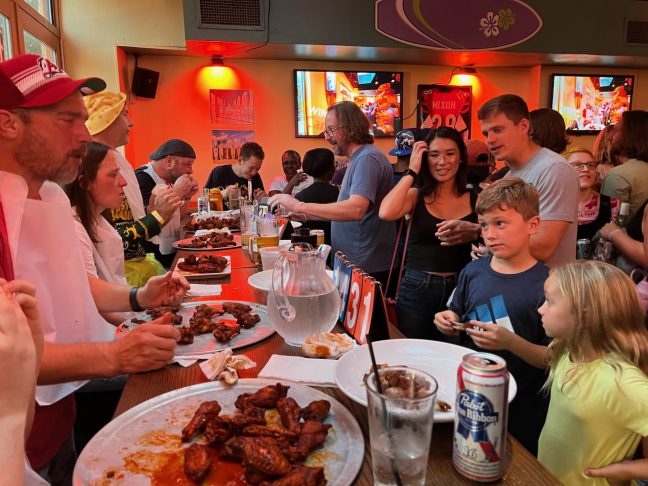 This past August, Woodie’s Flat in Chicago’s Old Town neighborhood hosted 11 contestants with an appetite for social justice and who were ready to put money where their mouth was.

The Associate Board of the Chicago Coalition for the Homeless staged its 2nd Annual Wing Eating Contest and the resulting donations gathered by the contestants totaled $13,500 to support CCH’s mission.

Shawn Gibala, the General Manager of Woodie’s, was so enthused after the 2021 contest that he threw his hat in the ring as a contestant this year and ultimately took second place. Shawn’s children, Charlotte (9) and Gavin (12), vociferously cheered him on. His son Gavin was instrumental in his father’s fundraising efforts as well. Plans have already been made to have Gavin visit CCH next summer to learn more about how to stay involved.

After the event, Shawn wrote to CCH: “I know that Woodie’s is just a little bar in Old Town but it’s events like these that make all the difference for the guests and the staff. This event was an incredible, fun, and meaningful experience!”

Dave Galantowicz, the event’s third place winner, had an inventive fundraising tactic. Friends and family that donated $50 or more to CCH were entered into a drawing. The donor chosen would get to pick Dave’s outfit for the competition. The result was an impressive $2,418 raised and Dave, the good sport that he is, wore a garish Green Bay Packers sweater, a bucket hat,  and a yellow tutu as was requested by the winning donor.

First place went to Ben Nameche, who achieved a lifelong dream of  participating in an eating competition. Ben posted a video the next day thanking everyone who contributed to CCH and announced his retirement from such activities. He hopes to support CCH next year by recruiting his sister Bridget to take up the mantle.

CCH would like to thank the Associate Board for staging such fun and effective fundraisers, the staff of Woodie’s Flat for making us feel welcome for a second year in a row, and all 300 of the donors to CCH that made the event a huge success!