Jones, who lives beneath the Wilson Avenue overpass in a homeless encampment with 17 other people, pushes debris away from the tents as part of his job on the “cleaning detail.”

Jones said he has lived there for nine months, and the cleanings are just one of many roles he created as part of a governance system for this tent city. Everyone who lives here has to participate.

Each morning, someone in the group clears away the trash. Normally, they’d use brooms for the sweeping, but those were recently stolen, so Jones makes do with a small square of tarp.

“We’re trying to form some type of organized community where we work together, for however long we going to be here,” Jones said. “I designed it personally because I live here. They live here. We live here. We don’t want to live here.”

Jones said he and his tent city neighbors needed a way to keep their environment orderly, both for their own health and safety, and to discredit outsiders’ claims that the encampment might be a public nuisance.

“I came up with it one night, talked to everybody — what do you all think? Let’s do it,” he said. “It’s been that way ever since, two months now.” 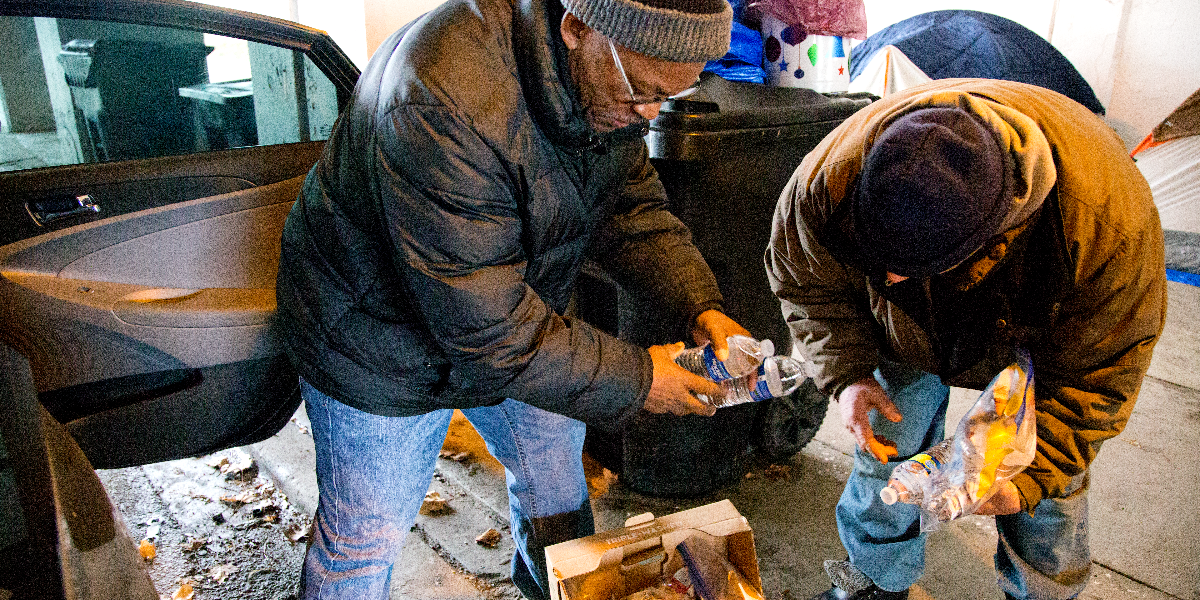 Danny Collins, a South Side resident, pulled over and got out of his car to tell Jones he’d brought several packed lunches of hot dogs, chips and water. Jones followed protocol and called Carmen Sisto, head of the cleaning detail.

LINK TO LISTEN TO THE WBEZ REPORT.

With hot food deliveries like this, Sisto accepts only enough for people who are already up and about. Any extras could attract rodents.

Jones pointed to a dead rat between lanes under the viaduct. He said they used to run along the viaduct walls and gnaw into the back of tents at night. Jones and Sisto effectively stopped that by laying down boards soaked in a toxic solution behind the tents.

“People don’t understand when they bring food, and they sit it down among the tents, (the rats) come,” Jones said. “Sometimes they come in hordes.” 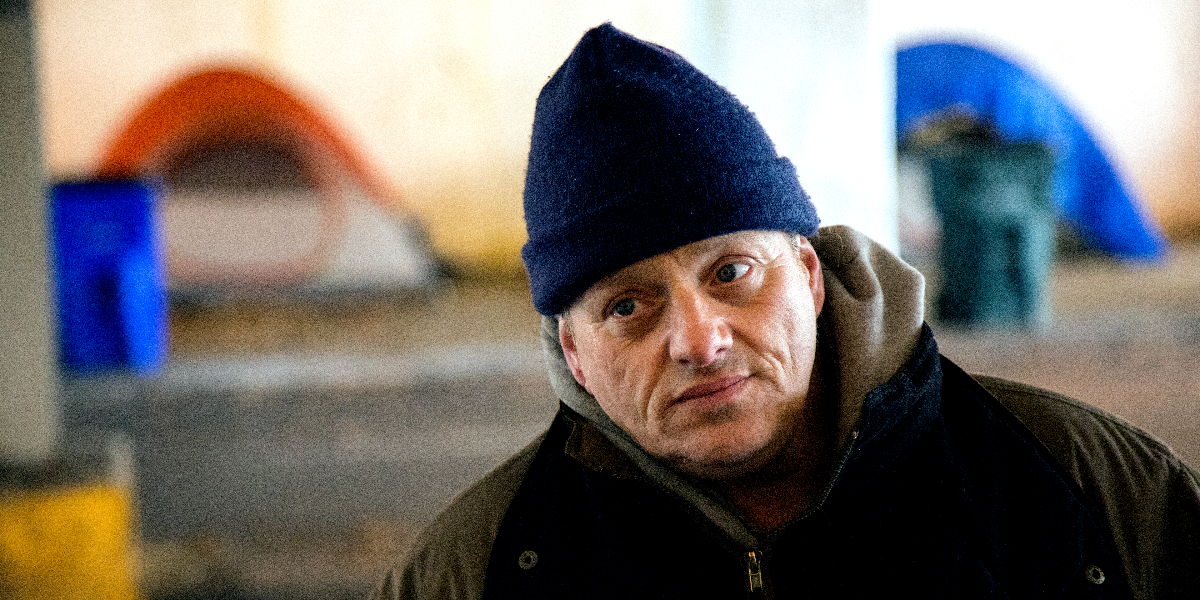 Sisto assigns the daily cleaning duties to a different person each morning.

“Sometimes they don’t like it, but that’s alright,” Sisto said.

Jones said they’re also careful to recycle. The group collects their empty propane tanks, in particular, in empty milk crates that someone drives by to pick up.

With non-perishable donations, such as clothing, blankets, hygiene products and propane tanks for small heaters, Sisto keeps a tight control of inventory. He stocks items in three storage tents.

“I lock everything up in tents with padlocks on them,” Sisto said.“If someone needs something, we have no problem giving it to them,”

But if anyone in the community steals the communal supplies, there are consequences. 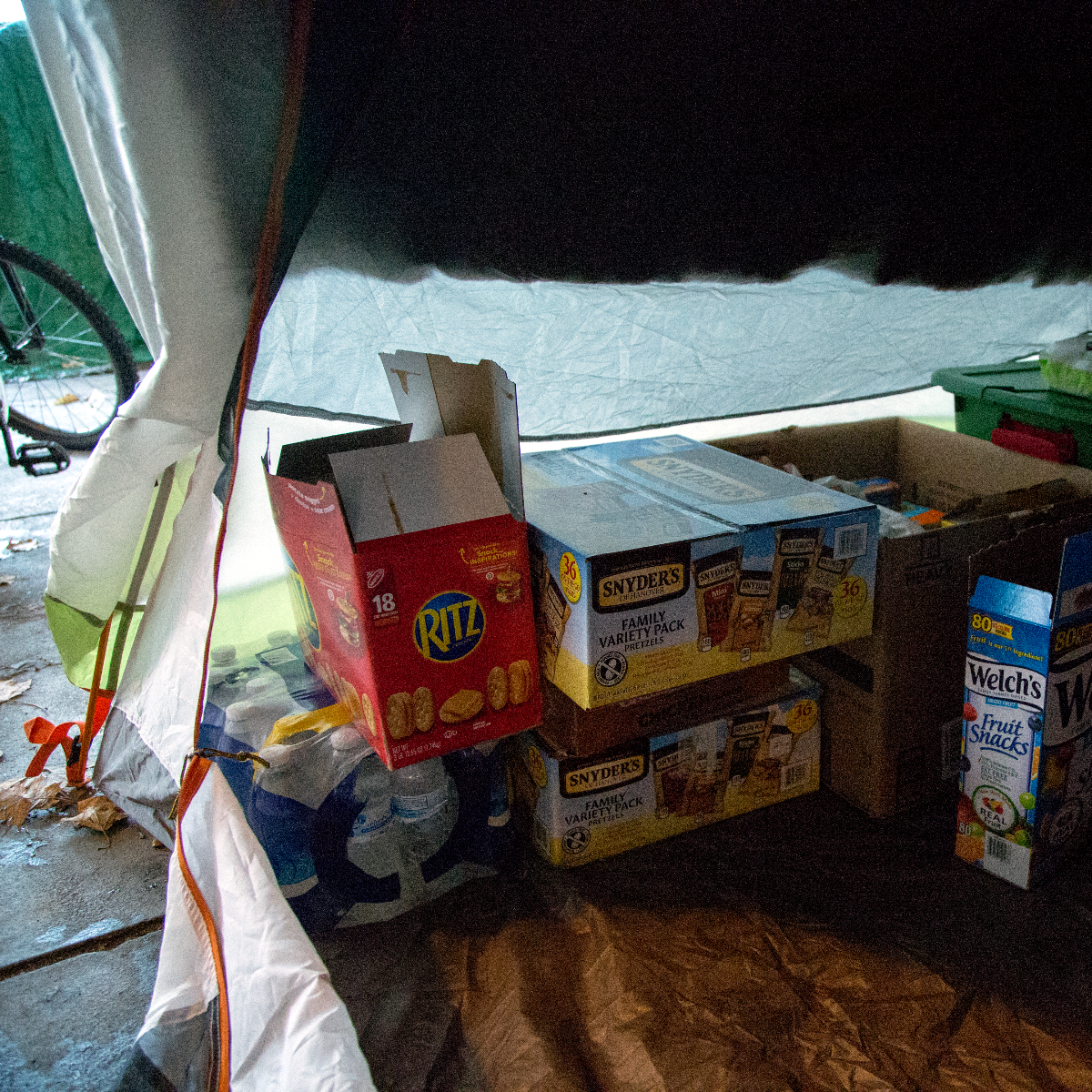 Non-perishable supplies are kept in a storage tent secured with a padlock in the Wilson Avenue tent city. (Andrew Gill/WBEZ)

The cardinal rules of the Wilson Avenue viaduct community are don’t steal, don’t disrespect others in the tent city and don’t disrespect outsiders who pass through. Violations are taken up and discussed by the group.

“We have a house meeting, with the house elders,” Jones said.

Though Jones is 50 years old and the mastermind of this system, he’s not a house elder. The elders are two twenty-somethings who’ve been homeless at this location for two years — longer than anyone else in the group.

“No matter what we decide, the house elders got the last word,” Jones said. “If it’s an infraction that will bring about CPD or somebody gets hurt, then we put it to a vote.”

In extreme cases, Jones said, they will kick someone out of the community, escorting that person out from the viaduct with his or her tent and belongings.

The group also holds house meetings to reach consensus on which supplies they most need. 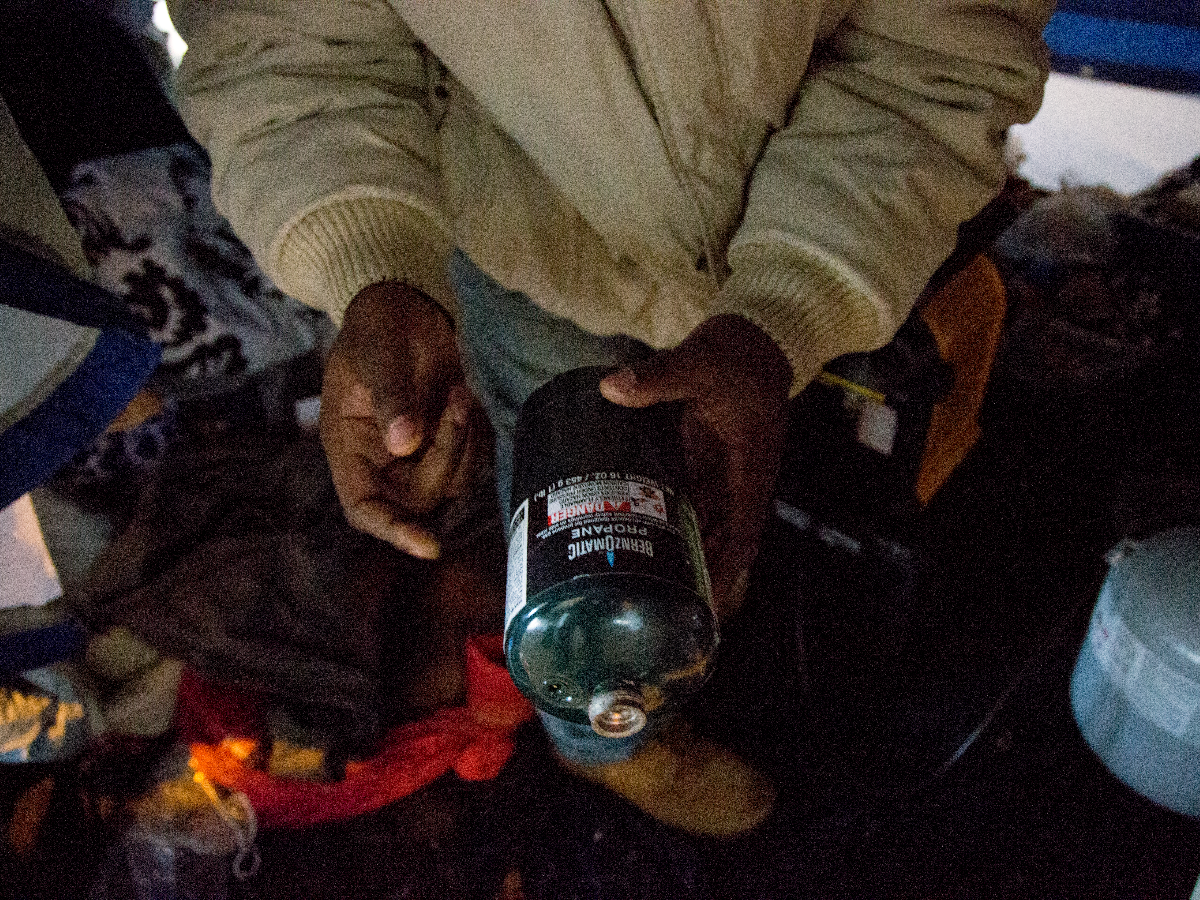 William Brown, one of the house elders, shows the propane tanks community members rely on for heat in the Wilson Avenue tent city. (Andrew Gill/WBEZ)

“Every neighborhood deserves some type of comfort at night,” said Jones, fiddling with a small, blue two-way radio. “This is how we monitor at night.”

The group has three radios that Jones and two other security detail members keep. He said they switch off two-hour patrol shifts, watching everyone and everything that comes near the viaduct.

Jones said night is when tent sleepers — and their possessions — are most vulnerable to people who come through to cause trouble or to steal. But the community still maintains a welcoming posture to anyone who needs a place to sleep. They keep a couple of unoccupied tents stocked with blankets for newcomers. 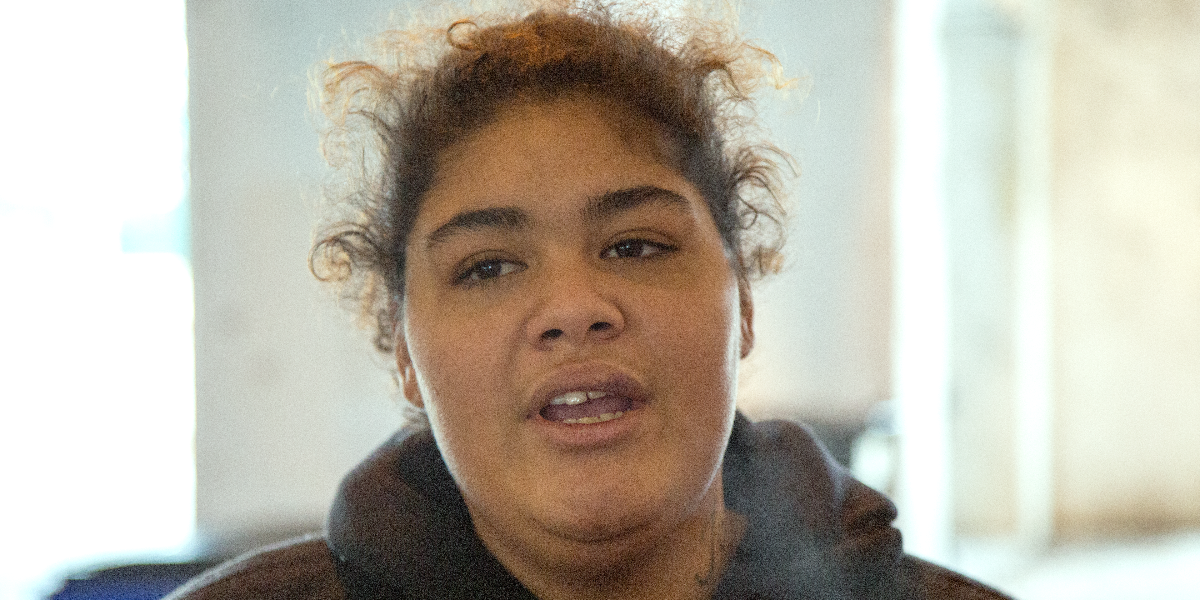 Shenise Cottreau leads the tent city’s women’s crew with another of the female residents. (Andrew Gill/WBEZ)

“If a female comes down who don’t have no place to go, we give them blankets, a little tent for the night, and we tell the men we did that,” said Shenise Cottreau, the 20-year-old who leads the tent city’s women’s crew with another of the female residents.

She said they make sure women who come to the tent city have food, and they distribute any female-specific donations, such as tampons.

Cottreau said she’s been homeless for three years, and used to sleep in parks and on sidewalks in Uptown. She said the Wilson viaduct tent city is the first place she has felt secure. She described the community as a family.

“We fight, we argue. We say s— to each other we don’t mean,” she said. “But at the end of the day, we still combine. Because out here makes it to where you have no choice but to really combine.”

“We’re trying to get out of here” 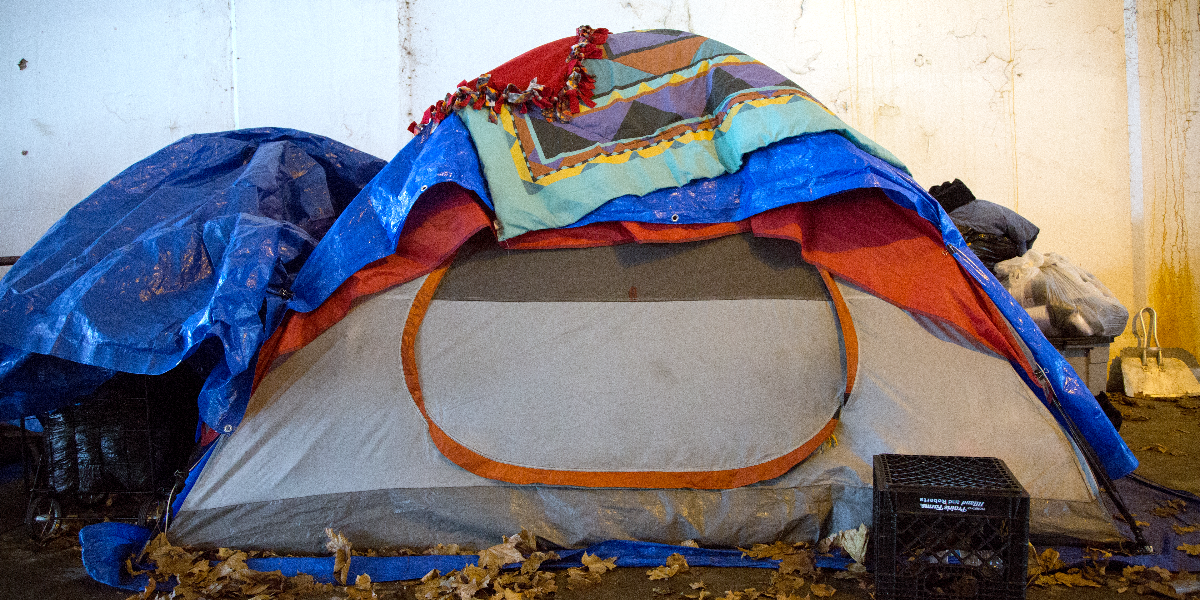 A tent under the Wilson viaduct has a crate in front of it for recycling propane tanks. (Andrew Gill/WBEZ)

The organizational system has only been in place for two months, but Jones said it’s made a big difference in how clean and safe the viaduct feels.

The strict rules, in part, account for the relatively few tents in this encampment, Jones said. If someone is removed, he said, they often go to the viaduct just north of them, on Lawrence Avenue, where tents are crammed against each other on both sides of the street.

Jones said his knack for organizing and delegating came from his time in prison.

“I was a young, wild little boy. I did all the stuff kids did, went to jail, went to prison, all that stuff,” he said. “And you learn in those certain structures, prison and controlled environments, you learn stuff like this.”

After prison, Jones applied his logistical skills while working in shipping and receiving for a large corporation. But rent on his Uptown apartment was hiked, forcing him out onto the streets. After that, Jones said keeping a job was nearly impossible.

Jones said the system at the viaduct keeps his skills sharp, but it also takes up all his time. He said he would rather be working.