POSTSCRIPT: Its first day, the CHIberia Challenge mobilized more than 200 kind people to give $4,621 to aid homeless youth. The campaign was extended through January, raising $7,585! Our deep thanks to all.

During this week’s big freeze, a CrowdRise campaign to benefit CCH – dubbed the CHIberia Challenge – was mobilized by Carlo Lorenzo Garcia, a Chicago actor and founder of Living Philanthropic, and his friend, Sarah Frier.

As we saw the campaign take off, CCH decided to dedicate the funds to buying dinners and CTA rides for street youth – an average of 15 youth a week – who attend our weekly meetings at the Broadway Youth Center. CCH supplies the food and transit cards, averaging $150 a week in expenses.

That comes to $7,200 a year, the goal of the CHIberia Challenge!

Everyone at CCH is awed by the breadth and generosity of the Living Philanthropic and CrowdRise communities.

The HELLO youth group is in its 10th year, believed to be one of the longest-running such groups in the U.S. ONE Northside and the Broadway Youth Center staff help CCH’s youth staff run the group, with plans to again involve The Night Ministry in 2014. Youth in the group, ages 16 to 24, are coping with homelessness that usually began in their teens. Most are people of color. Some are parenting, some are LGBT. 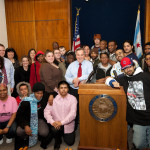 HELLO youth speak up about the needs of unaccompanied youth in Chicago. Among their successes, a group of 25 HELLO youth met with Mayor Richard Daley in 2010 – that meeting led him to establish Chicago’s homeless youth task force, and to pilot the first overnight shelter for youth, The Crib.

The youth also testified in 2012 when the city of Chicago was developing its new homeless plan, joining the youth task force in pushing for more youth shelter beds and drop-in programs – the city reallocated $2 million to add beds and programs opened in 2013.

CCH is grateful to Mr. Garcia’s Living Philanthropic, a project he founded in 2010 to raise funds for a broad range of non-profits – including 365 charities, or one a day, helped in its first year. Living Philanthropic’s fundraising platform relies on CrowdRise, one of the fastest growing online fundraising websites. CrowdRise describes itself as “a unique blend of crowdfunding, social networking, contests, and other nice stuff.”

From what we’ve seen today, we can testify to that!