By Lyndsey Layton and Emma Brown

The number of homeless children in public schools has doubled since before the recession, reaching a record national total of 1.36 million in the 2013-2014 school year, according to new federal data.

The latest homeless count, an 8 percent increase over the 2012-2013 school year, is a sign that many families continue to struggle financially even as the economy recovers from the housing collapse of 2008. And it offers a glimpse of the growing challenges that public schools face nationwide as they seek to educate an increasing number of low-income children.

The impact is profound on public schools, which struggle to try to address the needs of homeless children. Teachers often find themselves working not only to help children learn but also to clothe them, keep them clean and counsel them through problems — including stress and trauma — that interfere with classroom progress.

Many schools receive federal funds meant to help connect homeless students with support services. But that federal funding has not kept pace with the increasing need: In fiscal 2006, the Department of Education distributed $61.8 million for homeless youth programs. It had fallen slightly to $61.7 million by 2013, then increased slightly to $65 million in 2014.

Nationwide, student homelessness has increased steadily since 2009, continuing to rise even after the U.S. unemployment rate began falling and much of the country began recovering from the recession and the housing crash that helped cause it. Now, nearly 3 percent of the nation’s public school students are homeless, the data show.

“One of the things we note during recessions is that young families and kids tend to be the ones who go into poverty first, almost like a canary in a coal mine,” said Bruce Lesley, president of First Focus Campaign for Children, an advocacy group. “But also in the back end, kids are the last to recover. Because this recession was because of housing, it’s been particularly bad for kids.”

California, the most populous state, had the largest number of homeless children: more than 310,000, or 23 percent of the national total.

It was followed in descending order by New York, Texas, Florida, Illinois, Michigan, Georgia, Washington, Kentucky and Missouri. The state with the smallest total was Rhode Island, which reported 1,020 homeless students.

“It’s obviously tied to the Great Recession,” said Tina Jung, a spokeswoman for the California Department of Education.

But California’s population of homeless children fell sharply after the recession, in 2009-2010, and then rose more gradually until 2013 before spiking in 2014, according to the federal data. Student homelessness also is more prevalent there than in almost any other state: Nearly 1 in 20 children in California experienced homelessness during the 2013-2014 school year. 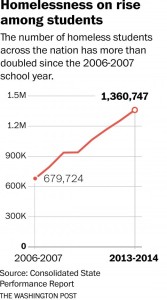 Barbara Duffield, director of policy and programs at the National Association for the Education of Homeless Children and Youth, said she thinks the rise could be driven in part by the economy but also by schools getting better at identifying and counting homeless children.

“They might have had a reasonable caseload, and now they have a stack of referrals. They’re scrambling to make sure transportation is arranged, they’re coordinating clothing and school supplies with outside agencies, they’re trying to make referrals for housing if it exists,” Duffield said. “And, of course, for the classroom teacher, there are all kinds of challenges. Homeless students may have trouble focusing, there’s more transition, all sorts of things that can be destabilizing for a classroom.”

It is not just urban school systems that grapple with homelessness; the problem extends to rural and suburban communities, especially as the revitalization of cities has forced low-income families to look for cheaper housing elsewhere.

Sonya Shpilyuk, an English teacher at Watkins Mill High School in Maryland’s Montgomery County, just outside the District, said that she often doesn’t know which of her students are homeless, and that creates a barrier to helping them.

But she makes a Costco run every three weeks to keep her classroom stocked with healthy snacks for hungry students. And she watches for signs that students don’t have a steady place to live.

“The thing about kids who have really troublesome home lives — not just with homelessness but other things, too — is that they have this defeated look on their faces, because they’re trying, and it’s not working,” she said. “They’re tired, and they’re hungry, and it’s stressful because they don’t know where they’re going after school.”

One problem, advocates say, is that the federal department of Housing and Urban Development’s policies are geared toward chronically homeless adults, not children. For instance, HUD considers a child to be homeless — and eligible for services such as transitional housing — if he or she is living in a shelter or on the street but not always if the student is living with friends or in a motel.

“The vast majority of families and youth don’t fit the HUD definition of homeless,” Duffield said.

A bipartisan bill pending in Congress would create a consistent federal definition of homelessness and prohibit HUD from prioritizing the needs of the chronically homeless — who are typically adults — over those of children and families.

HUD officials said that complaints about the agency’s focus on chronic homelessness are based on years-old policies that have since changed to include a new emphasis on other kinds of homelessness, including among families and veterans.

And they say arguing over eligibility rules for homelessness assistance programs misses the bigger problem: There just aren’t enough resources for people in need.