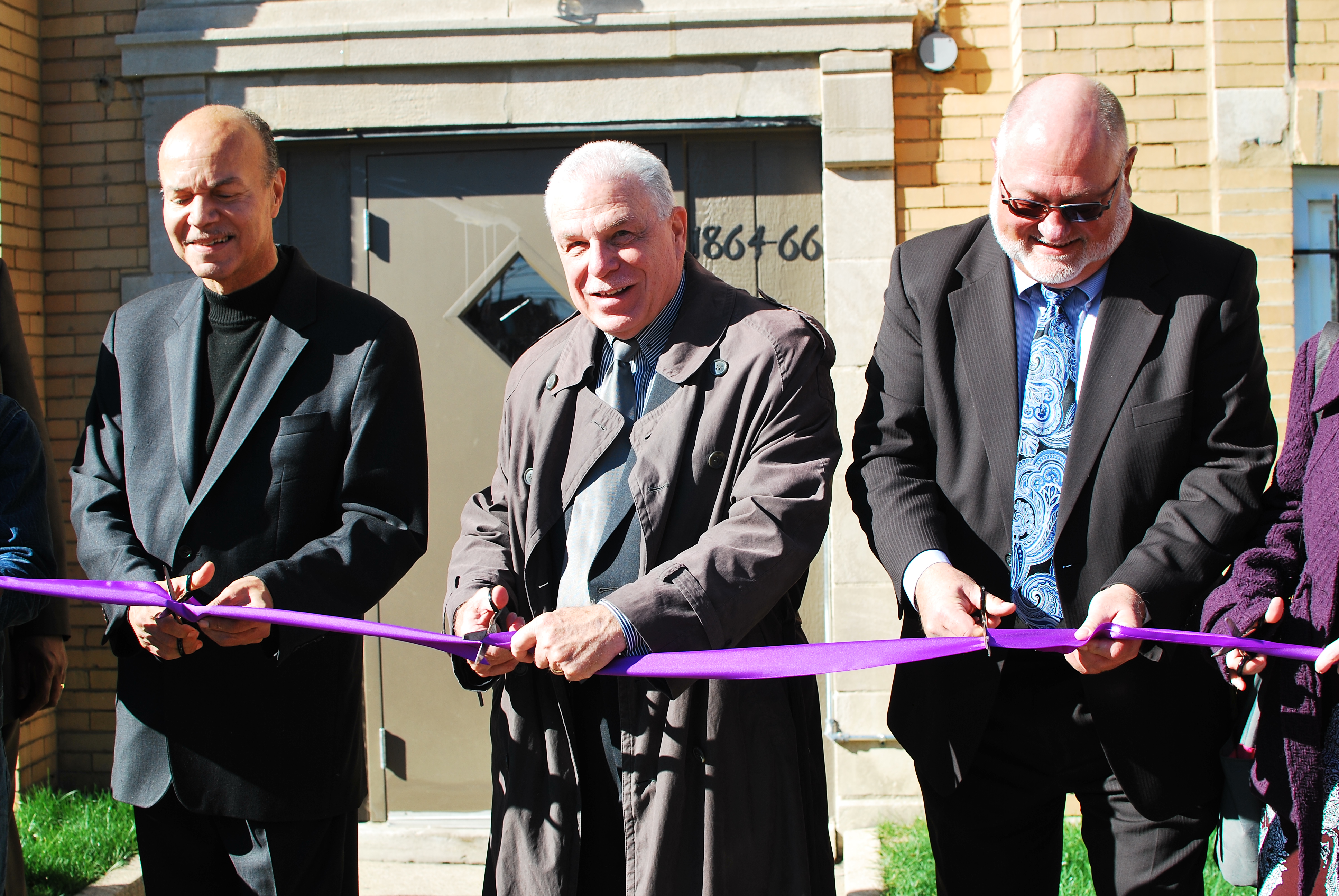 Sweet Home Chicago proposed that Chicago launch the Tax-Increment Financing (TIF) Purchase-Rehab program. The 10-member housing coalition is managed by the Chicago Coalition for the Homeless.

“I particularly want to congratulate all of the coalition members of Sweet Home Chicago,” Andrew Mooney, commissioner of the city’s Department of Planning and Development (DPD), said during the October 28 ribbon-cutting. “You persevered, you were committed… This is the award for all your hard work.”

Said Alderman Michael Chandler (24th), “The program took a once deteriorated property and revitalized it through this creative use of TIF funding. We are grateful for the efforts of all those involved in this worthwhile project. We also wish both the current and future tenants of this building many years of occupancy of this newly restored structure.”

To date, the city has allocated $1 million in each of four TIF districts. Also after advocacy by Sweet Home, the city’s five-year housing plan adopted in February 2014 committed $7 million a year ($35 million total) to TIF Purchase-Rehab.

Developers are still being sought for projects in three other TIF districts that have secured $1 million allocations. These are in the Humboldt Park, Chicago/ Central Park, and Division and Homan TIF districts. Projects in these districts will be awarded by the non-profit Community Investment Corporation (CIC), which manages TIF Purchase-Rehab for Chicago’s DPD office.

The newly completed apartment building is the first of two funded by a $1 million TIF allocation in the West Side’s Ogden/Pulaski TIF district. With a nine-unit building being completed this fall at West 16th Street and South Sawyer Avenue, the $1 million will restore 35 apartments, at an average city cost of almost $28,600.

Housing developer Pangea secured a $735,000 TIF grant for the $1.4 million project. As provided under TIF Purchase-Rehab, half of the three-story building’s apartments are designated for low-wage households that earn half or less of Chicago area median income ($37,700/year for a family of 4, for example). It offers nine two-bedroom units already leased, as well 17 one-bedroom apartments renting for $695/month.

The Komensky building had been badly run-down, with 15 apartments uninhabitable due to ripped floors, broken windows, missing plumbing and cabinets, a CIC official explained at the event. Back porches and electrical wiring needed replacement, and $17,000 in back taxes were owed when CIC became its court-appointed receiver in 2010. CIC purchased the 90-year-old building for $275,000.

CIC Senior Vice President Michael Bielawa praised Pangea’s Peter Martay and his team for this “and hundreds of of other units they have restored to useful life in Chicago,” as well as Commissioner Mooney and CCH for their “very hard work.”

Charles Jenkins, a CCH leader who lives in the 24th Ward, praised the project as “the exact example of what the TIF fund was created to do – affordable housing in communities just like this one that I live in, and others in this great city of ours.” Instead of using TIF to help wealthy corporations, “we would like to see (TIF) be more involved in helping to develop buildings like this.”