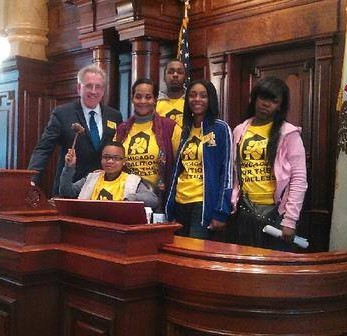 The Illinois General Assembly adjourned May 31 with a “spending plan” for FY16 but without the revenue needed to support that plan, leaving the state budget incomplete.

This plan includes funding reductions for housing and homeless services that are minimal compared to the disastrous cuts recommended in Gov. Bruce Rauner’s proposed budget. The plan rejects the governor’s budget proposal and points to the need to raise revenue to prevent permanent damage to infrastructure that supports kids, communities and working families.

FY 2015 funding levels do not adequately meet the needs of homeless youth and families, and in fact, flat funding is essentially a “cut” due to rising costs each year. However, these funding amounts indicate that housing and homeless services are a priority to the General Assembly and clearly identify the amount of revenue needed to fulfill this priority. In sharp contrast are the cuts recommended in Gov. Rauner’s proposed budget, which would destroy safety networks for vulnerable populations and lead to the increased costs of chronic homelessness.

Fiscal policy experts agree that the Illinois fiscal crisis cannot be fixed by cutting programs and that adequate revenue must be raised to prevent deep cuts to human services and other programs on which families and communities depend.

The spending plan passed by the General Assembly totals $36.3 billion for FY16. This is approximately $3 billion less than what fiscal experts say the state is estimated to collect in revenue. Without additional revenue, funding levels in this spending plan cannot be supported. The delay in raising revenue prevents human service organizations from being able to plan for staffing, operations, and services, causing great stress and uncertainty for service recipients.

Homeless youth service providers are one sector struggling with lack of knowledge about the state budget outcome, though they’re acutely aware of the need for revenue.

“It is critical to develop other sources of revenue for life-saving human services to the most vulnerable,” said TLP Executive Director Jeri Linas.

Said Ms. Koppel, “The uncertainty of funding levels makes the decision to re-sign a lease for services space difficult, as is the prospect of laying off staff and turning young people out on the street.”

The Night Ministry provides services to homeless youths and adults on Chicago’s North Side. President & CEO Paul Hamann said the budget crisis “has forced safety-net social service providers to operate with a heightened state of uncertainty. We have to plan for the worst.”

Adding to this urgency are immediate funding eliminations announced June 2 by the Rauner administration:

* Reducing in-home services that allow seniors and people with disabilities to live independently.

This spring, CCH made 16 trips to the state capitol to advocate for raising revenue that adequately funds services and to advocate for substantive legislation. Our organizers brought 463 people to Springfield – they included 388 homeless and recently homeless leaders, and 75 student and community leaders. The leaders were affiliated with 35 service providers, schools and universities that work with CCH. All told personal stories of what these services have meant for their lives.

This legislative session CCH took on a new leadership role within the Responsible Budget Coalition, chairing its Field Committee. The dire threat to service providers and people experiencing homelessness led CCH to increase its advocacy around raising state revenue. CCH worked with General Assembly leadership and staff to coordinate testimony of people impacted by proposed cuts at public hearings. We led other human service organizations to engage in increased advocacy through press conferences, in-districts meetings, and public actions, seeking to increase media attention and public awareness of the threat to families and communities.

CCH and partner organizations call on Illinois politicians to act without delay to pass legislation to fill the revenue gap, thereby adequately funding human services and other sectors and allowing providers to plan for the coming fiscal year. As a leading member of the Responsible Budget Coalition, CCH calls for 1) adequate revenue to fund the state’s priorities; 2) no cuts to programs; and 3) fairness in raising revenue and funding allocations.