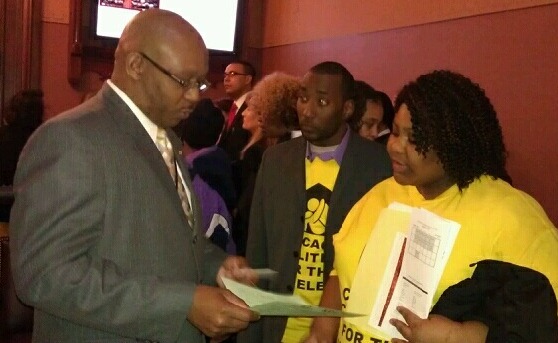 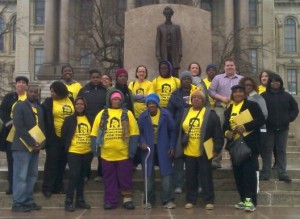 “People listen when you talk to them and that gets things done. We have our game faces on when we go, and we tell it like it is.”

Charles Jenkins, a CCH community leader, is quick to explain why he spent the day Wednesday traveling to and from Springfield to talk with legislators.

Yellow t-shirts with the CCH logo could be spotted all over the State Capitol, from legislative offices to the Senate and House chambers as the CCH groups broke into smaller teams to talk with their district reps and senators.

“We passed out information sheets and just got the word out. I hope they listen to their hearts,” said Jasmine McGee, who lives with her 1-year-old in transitional housing at Our Lady of Solace in the Englewood neighborhood.

In FY 2009, the state budgeted $3 million for grants to homeless school programs. The state dropped funding after mid-2009, despite a 79% enrollment increase in homeless students. In 2011-12, Illinois public schools identified 47,816 homeless students.

The message to lawmakers was simple and clear: Restore homeless school grants, and support Gov. Quinn’s proposed budget of $4.1 million for homeless youth programs (the same level as this year).

The Springfield trip inspired leaders like Jessica Maxwell. A resident of New Life Interim Housing, located in the North of Howard neighborhood, Jessica saw that if she worked in government, she’d “be able to help people some day.”

Kudos to the leaders, students and staff from these groups that joined CCH in Springfield on April 10.