Helped by community organizers at the Chicago Coalition for the Homeless, Sonovia honed the skills and self-confidence to land a new job at a non-profit agency. Years of go-nowhere temp jobs are behind her.

“If I hadn’t worked with CCH, I wouldn’t know what I know now,” she said. “They were the first people to tell me I did something good. It empowered me when I saw that I could organize other people. It gave me the strength to organize my own life: What did I want to do first? How should I go about doing it?” 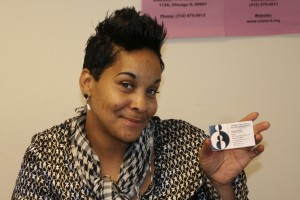 A ward of the state in her youth, Sonovia, now 39, spent 15 years trying to overcome a drug addiction. It was an up-and-down life that spiraled back down when her husband suffered a deadly asthma attack. Grief prodded her back into drug use, and months later Sonovia was convicted of a drug-related charge. She was sent to a women’s prison for two years.

Sonovia completed drug treatment and developed a spiritual life there. She says that’s what helped her commit to forging a new life with her sons, then living in the care of an aunt. She took the first steps “on August 17, 2008, the day I moved into Ashunti House.”

Within weeks at the West Side halfway house, Sonovia met a CCH organizer who ran outreach sessions for ex-offenders. “Drea, the organizer, came in and talked about affordable housing and the lack of housing for people re-entering the community. The first thing that came to my head was I could be a part of something.”

Sonovia signed up to be at a CCH community meeting on youth homelessness. A few weeks later, she joined a busload of 50 people heading to Springfield. She asked to join the Re-Entry Committee, which advocates with the CHA to allow selected ex-offenders to access public housing. Sonovia became such a strong speaker that in 2009 she was invited to join the Speakers Bureau – a group of homeless and recently homeless people whose talks reach a community audience of more than 3,200 people each year. 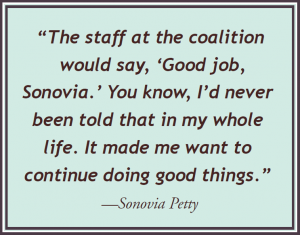 “I liked the Speakers Bureau, going out educating people. I felt empowered. The staff at the coalition would say, ‘Good job, Sonovia.’ You know, I’d never been told that in my whole life. It made me want to continue doing good things.”

During the four years since she came home, Sonovia searched for a job that would allow her to support her family. In this tough economy, she found only short-term jobs that left her struggling to pay rent and feed her boys. This fall, she was thrilled to find a job for which she is well qualified: She was hired as an organizer for Chicago Legal Aid for Incarcerated Mothers (CLAIM).

Needless to say, Sonovia received enthusiastic references from the staff at CCH.

“When you’re tired of how things have been, there’s nothing you won’t do to change your situation,” she says, with a well-earned smile.