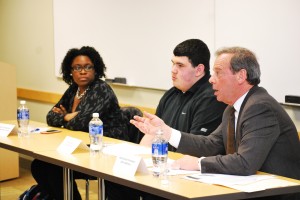 “Two years ago, me and my family were forced to live in a tent in Indiana,” Tim told the audience, “because we had nowhere to live. It was the middle of winter and my little brother was just born.”

Tim is a junior at Tilden, a South Side high school where more than half of the enrolled students are homeless. “The whole time I stayed in the tent I missed a total of three months of school,” he added.

Moved by the speakers’ stories, the DePaul audience participated in a larger discussion of how to end homelessness in Illinois, including raising minimum wage and creating affordable housing. Ashley told the group, “My involvement with the Chicago Coalition for the Homeless has allowed me to educate the community on an issue that many people are misinformed about.”

During the discussion, Sen. Cullerton said that due to the expected drop in the state income tax rate, there will be a $3 billion hole in the state’s budget for social services, but he will continue to fight to maintain current funding. He encouraged the audience to register to vote and to speak with their legislators’ about issues regarding homelessness, noting that no one deserves to live in that situation. 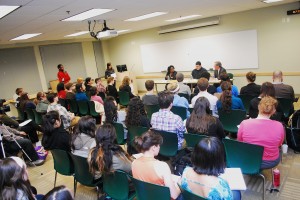 Asked what he thought of the event, DePaul freshman Jordan Jedry said, “Hearing the various ways that I could contribute to the achievement of rights for homeless people really opened my eyes as to what I am capable of doing to make a difference in the lives of homeless and formerly homeless youth.”