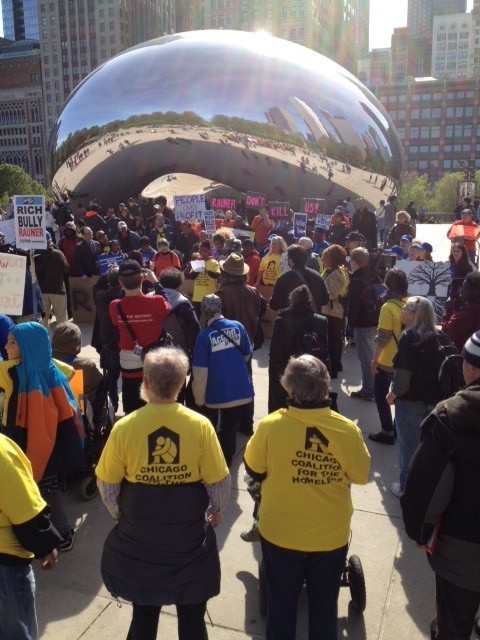 In response to Gov. Bruce Rauner’s proposal to cut $18 million from programs for homeless youth, emergency shelters and supportive housing, more than 200 advocates staged a “Raunerville” camp near one of the governor’s nine luxury homes Wednesday.

Their message was loud and clear: Cutting state funding to these services would increase homelessness and desperation among those already hanging by a thread in Illinois.

We talked to some CCH leaders about why they joined in the protest, which started at the Bean in Millennium Park, followed by a march toward the governor’s nearby condominium building at 340 E. Randolph Street.

“I never thought I’d be homeless, but I was,” said leader Janet Ramos. “I got to see the full picture of all that’s involved in having shelters, supportive living, you know, Medicaid. Because for the first time I had insurance after seven years of none, but my health was debilitated already. But I’m still grateful because at least now I can try to maintain, try to keep my foot, my eyesight.”

Added Janet, “I know so many people personally who are going to be affected… You can’t do that to people. You can’t take away peoples’ hope. If people don’t have hope they won’t have anything to hold onto. And if the governor of the state is not going to represent the poor and the needy and the sick, who is?”

“I hope that they will understand that they can’t pick on the little people,” leader Ollie Walker said. “This is not going to fly and it’s not right. There are people that will stand against them. This is what they need to know… that they can’t get away with this.”

Said Wilvis Atkins, “A lot of families will be struggling. It’s going to be hard times for people. They won’t have money for health, healthcare, and all of that, Medicaid, and stuff like that.”

“I’m here to complain about the governor who wants to cut funds for homeless services,” said Miguel Sanchez. “It’s not just that he wants to do these cuts. That’s why I’m here so he sees that there are people here who care about this.”

Added Miguel, “I hope he gets the message that we’re here so that he doesn’t do the cuts that he wants to do.”

“You see the people here and the lines on their faces telling the story of their lives,” Jaime added. “This will add more lines to those faces.”