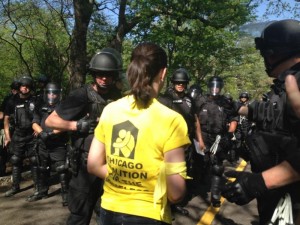 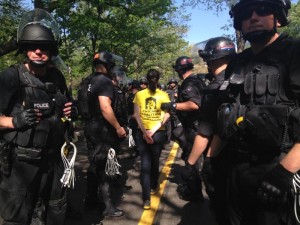 On May 21, I performed civil disobedience and was arrested along with 100 McDonald’s workers and 38 other community allies as part of the Fight for 15 movement outside of the McDonald’s Corporation headquarters in suburban Oak Brook.

Mass civil disobedience can be strategically smart. It is an escalation of organizing tactics that demonstrates to your target the lengths you will go to achieve your aim, and the organized people power you have behind your cause. It is also very effective in garnering media attention for your cause, as it was in this case, with many national media outlets also covering the protest, including USA Today, CNN and Associated Press.

It was a great honor to be arrested alongside the courageous and committed leaders of the Fight For 15 movement. Many of the leaders I spoke with that day said, “I never thought I would ever be involved in something like this… but I am just too fed up with getting no respect on the job and not being able to take care of my family.” I believe that their cause for economic justice is one of the most important causes of our time.

The Fight for 15 movement is close to home for CCH and to my organizing work. Many of our homeless leaders struggle to find a job that pays a decent wage that would allow them to have stable housing and a stable life. Many of the leaders I work with have additional barriers to employment, such as a criminal background or undocumented status.

This connection to homelessness, as well as my own reflections on the labor struggles that my own family members and friends have been involved in, led me to volunteer to represent CCH in participating in civil disobedience in support of the cause.

It was a very hot day in Oak Brook, and the energy of the crowd was electric. McDonald’s workers and allies came in from all parts of the country – Los Angeles, Houston, New York City, Baltimore, Boston, Raleigh, Detroit, Indianapolis, St. Louis – and joined Chicago workers and allies in dancing, singing, chanting and marching our way to the McDonald’s HQ, shutting down major Oak Brook streets as we went. Beneath this jubilant atmosphere was the very serious mission of pressuring McDonald’s to stop abusing its employees – and it was the workers themselves demanding this change. Many of the workers participated in the international Fight for 15 strike the week before. Every single worker I met that day was fully committed to the cause, and to going to jail for it.

When we arrived at the gates of the McDonald’s HQ, we came face-to-face with about 125 municipal and state police officers in full riot gear. They stared at us through their helmets and brandished huge clubs. They were nervous. There was a great tension between us, the team that intended to do civil disobedience, and these police officers. But all of us on the side of the workers were committed to nonviolence, and as a result, the action went smoothly.

When an officer announced through a megaphone that we were breaking city and state law and would be arrested unless we dispersed immediately, we sang back our response, “We shall not, we shall not be moved.” We were arrested one by one, and issued tickets.

As we performed this action in front of the McDonald’s HQ, the more veteran civil rights leaders among us reminded us of the roots of our actions – in the likes of Dr. King, Gandhi, and many others. I know that the McDonald’s workers will not give up their cause until they win a decent wage – because my leaders are the same way about the causes that are closest to them!