Editor’s Note: Chicago Coalition for the Homeless co-leads the organizing for the Westside Community Benefits Coalition. 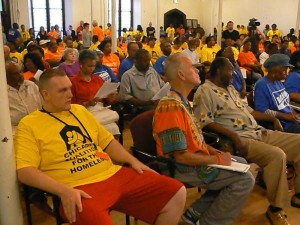 Called the Gateway Real Estate Development Project, the 9.5 acre project is set to be located between Odgen and Damen Avenues and consists of 1 million square feet of retail and office space. The site will include a 225-room hotel, young professional housing, parking facility, conference center, green space and multi-family housing.

GDP has yet to ask for any public dollars for the project. But the coalition held a rally last week at the First Baptist Congregational Church, 1613 West Washington Blvd., to put the developer and local aldermen on notice. Community residents say any use of public land or dollars should be tied to a community benefits agreement. The coalition also wants to secure a CBA for the proposed redevelopment of the former Cook County Hospital building.

“We know that they are going to ask and we felt that this was important because a lot of these communities are right in the area where they are building. So we figure why not [give] the people who live there [an opportunity] to work there,” said Christina Rice, of the Community Renewal Society, one of 20 groups involved in the Westside Community Benefits Coalition (WCBC).

Communities like North Lawndale and East and West Garfield Park have high unemployment rates and residents often leave their communities in search of jobs, Rice added. New housing developments that have cropped up in the area have traditionally focused on market rate housing, not affordable housing, she noted.

In additional to affordable housing, the WCBC would like the CBA to mandate that new businesses prioritize the hiring of local residents, including those with criminal backgrounds and the long-term unemployed, and offer jobs that pay at least $15 an hour. The coalition also wants a new hiring referral service to be created as a means to connect local employment agencies, like the North Lawndale Employment Network, with hiring managers for construction and retail jobs.

The coalition met with the developers and IMDC in September, and Rice said the parties were less than receptive to the idea of a CBA. Led by developer Jack Higgins, Gateway Development Partners LLC is a partnership between Thomas Samuels Enterprises, East Lake Management & Development Corp., Higgins Development Partners and Isiah Real Estate, LLC, which is headed by NBA legend Isiah Thomas.

“They’re like, ‘Just trust us. We are going to do the right thing.’ But they said right then and there [that] they are not looking to sign the CBA,” Rice said.

IMDC signed a lease agreement with Gateway Development Partners LLC in October 2014 to develop the site. The agreement includes minority recruitment goals and support for local hiring, according to an undated press release on IMDC’s website. However an IMDC spokesperson said it is under the contractors’ “sole discretion” to hire local residents.

“There is a community hiring provision under which the developer is required to work with the IMDC to introduce local employee candidates to contractors’ hiring managers who may, in their sole discretion, consider interviewing such candidates,” Heather Tarczan, IMDC’s director of communications and administration, said in an email.

As a result, the coalition is pressuring Ervin, whose ward includes the medical district, to get behind the push for a CBA “because we realize that he has the power to make them do this.” He has the authority to grant or reject tax increment financing dollars or zoning changes, all of which will be needed for the project, according to Rice.

Ervin was among several aldermen invited to the packed standing-room-only rally. Event organizers sought to get aldermen on the record as to whether they will advocate for a CBA as part of any request for public dollars from the developer.

The coalition got commitments from Ald. Walter Burnett Jr. (27th), and a representative for Ald. Michael Scott (24th) pledged his support. Ald. Emma Mitts (37th), who was invited, did not attend.

“I would not be surprised if they asked for TIF dollars, [but] my stance has always been the same. We want to see permanent jobs and construction-related opportunities for residents in these communities. That is something that I am committed to 100 percent,” Ervin said.

Burnett said it is “an uphill battle” to get contractors and developers to be responsive to the community. A lot of developers placate aldermen by hiring a few neighborhood people, according to Burnett.

“A lot of us have been bamboozled by developers and contractors in the past, so this is definitely needed,” Burnett added. “We need this kind of help when we are trying to get jobs for our folk. It is even hard for us by ourselves trying to get contractors and developers to hire our people from the community … So when you have people power, it is harder for you to be denied.”

IMDC Commissioner Blake Sercye is confident that some middle ground can be reached. He said many of the investors that are part of Gateway Development Partners have ties to and have worked on the West Side.

“We have a labor agreement in the lease agreement. We were very cognizant to try to be sure it was inclusive as possible to people from the West Side of Chicago,” Sercye said, adding the project will bring jobs and boost the area’s economy.

The hiring and job component is essential for North Lawndale resident Teleza Rodgers. She knows all too well the struggle to find employment. She has been sporadically employed since her release from jail 16 years ago. Her background, she noted, is a barrier to finding a job even though she’s certified in medical billing and coding.

“The purpose of a community benefits agreement is it specifies in the language that people with records will be hired [as well as the] long-term unemployed,” said Rodgers. “And many people who are long-term unemployed are [in that position] because they have a record. People have worked hard to turn their lives around and [the CBA] would give them a chance to provide for their families. It must happen. It is a necessity.”

Burnett is optimistic about the CBA. He said if all the elected officials, including the Cook County Board President Toni Preckwinkle and the IDMC commissioners get on board, “then I think we can put [the developer’s] feet to the fire.”

“We need to demand jobs whether they ask for TIFs or not,” Burnett said.