We are happy to introduce Jayme Robinson as our new AmeriCorps VISTA organizer. A three-year member of our Speakers Bureau, Jayme now manages the program.

Jayme works with Associate Director of Organizing Hannah Willage, who launched the Speakers Bureau nine years ago. Hannah leads education organizing for our HomeWorks campaign, including an Education Committee of homeless parents and students.

The Speakers Bureau is staffed by 15 people passionate about education and advocacy, the most active homeless leaders at CCH. Talking to audiences about their own lives, they speak about issues related to school access, housing and jobs, and developing opportunities for people to get back on their feet. In FY16, the Speakers Bureau spoke at 85 events, reaching an audience of 4,696 people. More than 90% of our audience is made up of students from the city and suburbs.

Our audiences ranged from 1st graders at Village Leadership Academy in Chicago’s River City neighborhood to graduate students at Dominican University in River Forest, from All Saints Lutheran Church of Orland Park to Washington High School on Chicago’s Southeast Side.

Our speakers motivate audiences to take action. Last year, CCH worked with 10 high schools and four universities to mobilize 289 student leaders. They joined us in hosting community awareness events and speaking to political leaders in Chicago and Springfield.

One example of one of our CPS service learning partnerships was our partnership with Crane. The 9th and 10th grade classes at Crane Medical Preparatory High School begin by researching and discussing youth homelessness. Next, the Speakers Bureau spoke and conducted listening sessions in 10 classes. As a culminating project, 330 students went into the community for a day of service. Students cleaned homeless shelters, tutored homeless children, helped in soup kitchens, and organized food banks. Ten student leaders partnered with CCH by meeting with State Reps. Christian Mitchell and Pamela Reeves Harris about the impact of the state budget crisis on homeless youth programs.

Finally, we want to thank the students of Trinity Christian College, DePaul, Loyola and Dominican universities for meeting with legislators to talk about homeless service funding and joining us at actions for the Fight for $15.

In her new VISTA position, Jayme Robinson will build capacity for the Speakers Bureau and strengthen its relationships with volunteers. Her work with the Speakers Bureau comes full circle: While studying sociology at the University of Illinois at Chicago, Jayme became a CCH speaker and joined the Education Committee. During summer 2015, she studied community organizing at the Midwest Academy, working at the Kenwood Oakland Community Organization (KOCO).

Jayme first became involved with CCH when she was selected as one of its 2012 college scholarship recipients for teens who have experienced homelessness. Always an honor student, she was kicked out of her home during her senior year of high school because she’s gay.

“CCH does an awesome job working with people directly impacted by homelessness,” Jayme said. “We are often left on the margins when social change is being discussed and worked on. By being a leader, I realized that I do matter, that I am valuable and worthy, and that when I join with others I have the power to make change.” 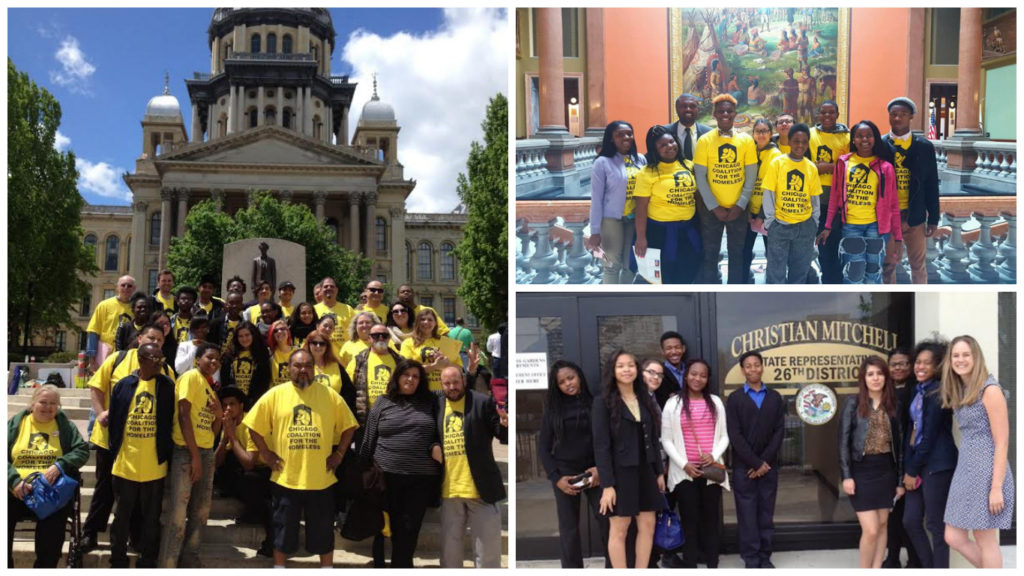 The Speakers Bureau wrapped up the year with its annual retreat on July 29. We are proud of the good work we did in FY16 and look forward to what we have ahead.

If you would like to invite the Speakers Bureau to your organization, please contact Jayme Robinson at jayme@chicagohomeless.org or (312) 641-4140.