By Sam Carlson, Manager of Research and Outreach

A new report from the Chicago Coalition for the Homeless shows 76,998 Chicagoans experienced homelessness in 2018, per an annual analysis by CCH that relies on the most current U.S. census data.

Though the city’s aggregate homelessness count decreased from the prior year, Chicago saw a nearly 2,000-person increase among those who lived on the street or in shelters. It is a development with troubling connotations today: The city’s shelter system is a hotspot for COVID-19 infections and homelessness is expected to climb dramatically during the worsening economic downturn triggered by the pandemic.

Per our analysis, the number who experienced homelessness decreased by 4,282 people, or 5.9% from 2017. This net decrease was concentrated exclusively among homeless people in temporary living situations, also known as living “doubled-up” or “couch-surfing.” The number who doubled-up in 2018 remained massive, at 58,872 Chicagoans. 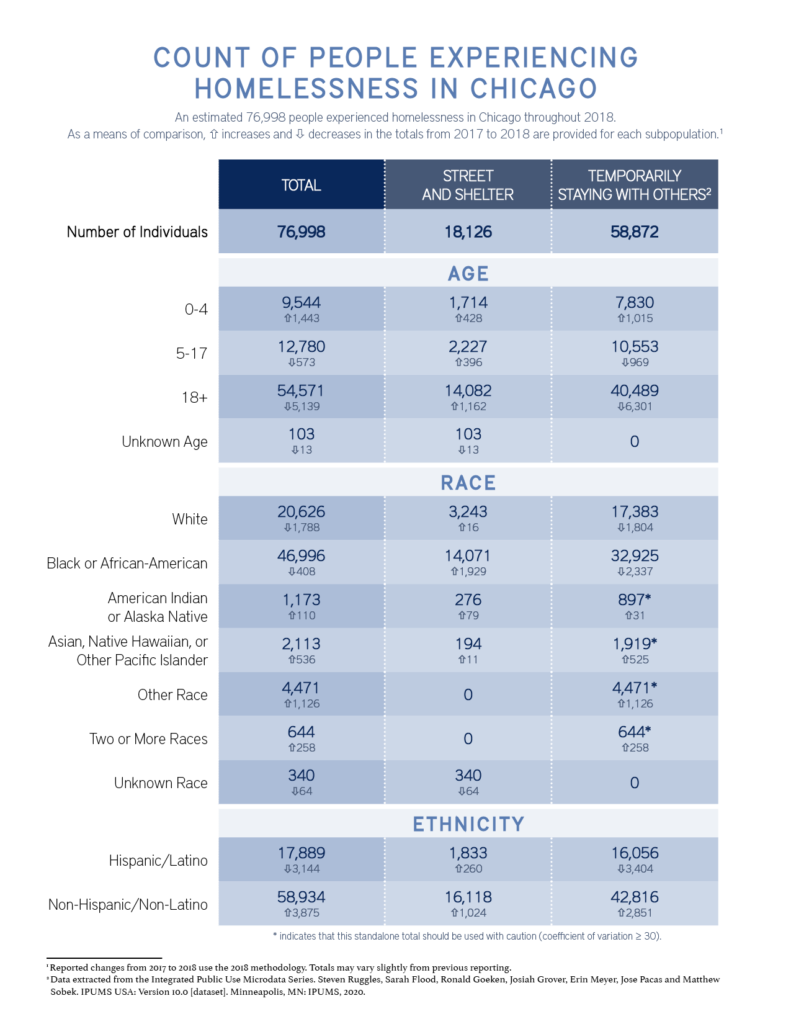 Altogether, the 2018 homeless estimate is lower than the 86,324 people tallied in the 2017 estimate, released last year. Most of the decrease is due to methodological changes in how doubled-up homelessness is defined in the CCH analysis. That leaves an amended count of 81,280 people who experienced homelessness in 2017.

While there is no single definition of homelessness, CCH has developed a model to more accurately estimate the scope of homelessness in a city. Chicago’s estimate is drawn from data compiled by the U.S. Census Bureau and the city of Chicago, and includes families, youth, and adults who must double-up, often in overcrowded and unreliable living situations. It is likely that their housing needs were left unmet, as they are generally ineligible for assistance if not living in shelters or on the street.

Many of those who doubled-up were students – children, teens, and some unaccompanied youth – who struggled to get an education without a permanent family home. In the 2018-19 school year, 16,451 Chicago Public Schools (CPS) students experienced homelessness, 87.5% (14,403) of whom doubled-up. Only 11% of homeless students were served by the shelter system.

This enrollment data is collected by the U.S. Department of Education, which recognizes all forms of homelessness that children and youth might experience. Meanwhile, the U.S. Department of Housing and Urban Development (HUD) has a far more limited scope, not recognizing those who experience homelessness by temporarily living with others. It’s one reason why a city’s HUD-funded point-in-time count shows smaller homeless populations, as HUD only recognizes those who live on the street or in shelters.

By not recognizing the homeless status of those who temporarily stay with others, HUD shut out nearly 59,000 Chicagoans experiencing homelessness from accessing the housing support they need.

Because those in temporary living situations have little, if any, access to government assistance, it would be wrong to credit most of the drop to government spending on homeless programs. These 4,282 people were doubled-up, so they did not have access to that kind of government relief.

The only exception locally is a pilot housing program, proposed by CCH and funded by the city, that provides long-term housing subsidies to 100 homeless CPS families. The CPS Families in Transition (FIT) program has assisted about 400 children and parents since the 2017-18 school year. To secure housing assistance, city agencies assessed the most vulnerable families in six CPS schools, whether sheltered or doubled-up. After a vulnerability assessment, 59% of families that secured FIT housing had been doubled-up.

It’s clear families that double-up experience homelessness with as much difficulty as people who must turn to shelters or live on the street. It is well past time the federal government acted that way.

In the meantime, CCH is committed to making sure their stories are told.