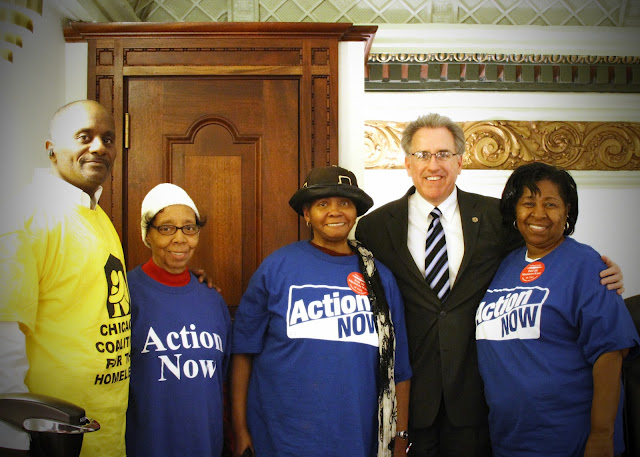 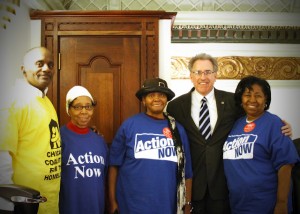 The Senate Executive Committee voted 9-5 along party lines (all Democrats in favor, all Republicans against) to recommend SB 1565 be put to a full Senate vote. Chief sponsor is Sen. Kimberly Lightford (D-Maywood), with backing from CCH and other allies in Raise Illinois.

A wage increase is opposed by some business sectors, but Edwin Cobb, of Chicago’s Lawndale community, testified in a Senate hearing that he supports a minimum wage that is “a living wage.” Mr. Cobb is a leader for the CCH Jobs Project, working with organizer Jim Picchetti.

“I stand before you today, not speaking from a vicarious experience, but I myself, had to work two to three jobs in order to raise my family off minimum wages. And at one point I had to quit one of my three jobs, which meant that I wasn’t going to have enough to support either me or my son.”

A spokesman for the Illinois Retail Merchants Association claimed in news reports that a wage hike would not relieve a 48% unemployment rate among Chicago teens.

But Sen. Lightford disputes that, as reported by the downstate News-Gazette: “In fact, over 80% of minimum-wage employees are adults. Many of them have households and families, and with our economic downturn … many college graduates are now working minimum-wage jobs.

“I think it’s really important that if you’re willing to work a 40-hour week you shouldn’t live in poverty. An individual working 40 hours on our current minimum wage, they make about $16,000 a year.”

The Sargent Shriver National Center on Poverty Law also testified about research by Marc Doussard, a professor in urban planning at the University of Illinois-Chicago. His research shows that a minimum wage hike would allow families to increase their consumer spending, creating $2 billion in increased economic activity and 20,000 new jobs.