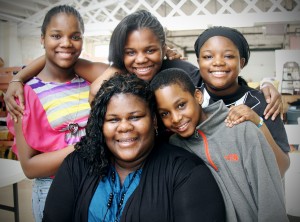 POSTSCRIPT: Marilyn’s family is profiled in our spring appeal. To thank supporters who give a tax-deductible donation of $100 or more, CCH will send an author-signed copy of Blue Balliett’s new children’s book, Hold Fast. Written by the best-selling author of Chasing Vermeer, The Wright 3 and The Calder Game, Hold Fast is a mystery centered on an 11-year-old girl and her family living in a Chicago shelter.