March marks the start of the 2020 Census and CCH is committed to supporting a fair and complete count among Illinoisans experiencing homelessness. 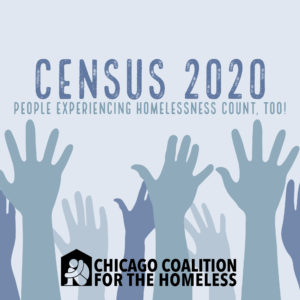 The census counts every single person living in the United States. Everyone counts no matter their housing status, income, age, race, or country of origin. The census happens once every 10 years, so it’s critical to get it right.

Whether you are permanently housed or living on the street, in a shelter, or doubled-up with family or friends, you should be counted!

Counting every person matters because census data impacts access to important programs and resources in your community:

The census also determines how much representation you have in Congress:

The census runs from March 12 through July 31. When completing the census form, you’ll note where you are living on April 1.

Are you living in a house or apartment or staying doubled-up at the home of a friend or relative?

Are you living in a shelter, on the street, or in a car?

You can still be counted if:

People experiencing homelessness who were not counted through the methods above can still complete a census form online or over the phone. Don’t have access to a computer or phone? Visit your local library and ask a staffer for assistance.

Help us make sure all Illinoisans are counted in the 2020 Census, no matter their housing status:

Questions about the census counting those who are homeless? Contact Gloria Davis, CCH’s Census 2020 Project Manager, or call her at (312) 641-4140.