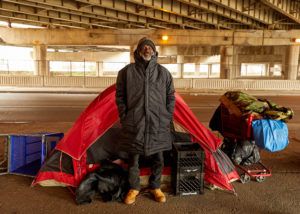 Chicago Coalition for the Homeless has a deep gratitude to our new friends at Spreetail for its generous offer to fund and distribute 160 ultra-durable winter coats to people living on the streets of Chicago.

Chicago was the second stop on a 20 city tour for Spreetail, an e-commerce company with operations in six states and eight major cities.  Giving back is central to Spreetail’s culture: They will be distributing 2,000 EMPWR Coats throughout the U.S. during the next two months.

The EMPWR coats that Spreetail chose to purchase and distribute were made by the Empowerment Plan. The Detroit-based nonprofit that hires and trains single parents from shelters as seamstresses, thereby allowing them to earn a stable income, find secure housing, and ultimately regain their independence. The water-resistant garment can quickly transform into a sleeping bag or be used as an over-the-shoulder bag in warmer weather. 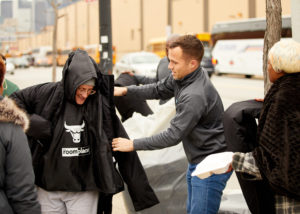 CCH staff coordinated the effort on what route to take throughout the city. The distribution happened on an early Friday morning in mid-November, and the timing of the distribution could not have been more perfect as it was the first cold snap of the season. Here are some firsthand recollections of how the day went:

Chad Kilpatrick and Clyde Johnson travelled all the way from Spreetail’s headquarters in Nebraska to spearhead the coat distribution.

Chad (shown helping a woman into her new coat) had this to say: “Seeing the relationship the coalition has built with the people of Chicago was phenomenal. I remember very distinctly when we approached a woman that was shivering because her only jacket was a raincoat. When we handed her a coat from the Empowerment Plan, the excitement and joy on her face was something I will never forget.”

Erika George works with the Empowerment Plan in Detroit.  She made the trip to Chicago to be a part of the distribution of the coats to persons living on the street.

“This experience impacted me in a significant way,” Erika said. “When we took the coats into the homeless camp, the people living there welcomed me into their community. I witnessed true strength, resilience, and gratitude in a way that I have never experienced before.”

“There are not too many opportunities when doing street outreach to witness pure, unmistakable joy” said Ali Simmons, CCH’s Street Outreach Community Organizer. “There were individuals that smiled, danced, and thanked us non-stop upon receiving the coat. One person even cried because he was so overwhelmed with gratitude.”

Ali speaks for all of us here at CCH when expressing his gratitude to both Spreetail and the Empowerment Plan for this opportunity.

“I think both companies were exceptional,” said Ali. “Even though they do not reside here, it was immediately clear they held a deep and genuine concern for homeless individuals here in Chicago.”